Western Airlines Flight 2605 was an international scheduled passenger flight from Los Angeles, California, to Mexico City, Mexico. On October 31, 1979, at 5:42 a.m. CST, the aircraft used for the flight, a McDonnell Douglas DC-10, crashed at Mexico City International Airport in fog, after landing on a runway closed for maintenance. Of the 88 people on board, 72 were killed in the crash; and one person on the ground, a maintenance worker, also died when the plane struck his vehicle. 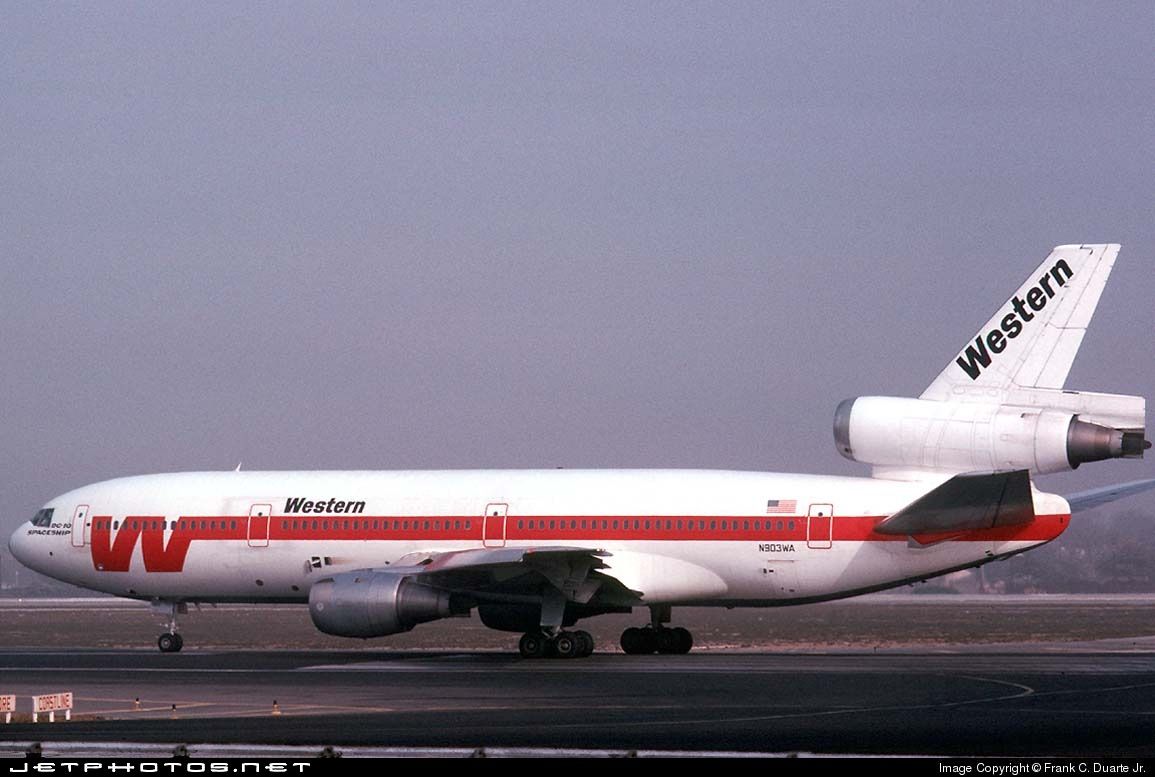 Mexico City International Airport has two runways: Runway 23 Left (23L), and Runway 23 Right (23R). At the time of the accident, runway 23L had full instrument approach equipment, including an Instrument Landing System (ILS), while Runway 23R did not. On October 19, 1979, a notice to airmen was issued stating that Runway 23L would be closed until further notice for resurfacing work. The October 31, 1979 flight left Los Angeles International Airport at 1:40 AM PST, and was scheduled to land well before sunrise in Mexico City. The airport was quite dark, as twilight had only started 5 minutes before the crash, and there was ground fog obscuring the runway.

As Flight 2605 approached Mexico City International Airport, air traffic controllers cleared it for an instrument approach using the ILS of Runway 23L, with an expected landing runway of 23R. With runway 23L closed for maintenance, what air traffic controllers expected Flight 2605 to do was to perform what is known as a sidestep maneuver to the (open) runway 23R. This meant that the flight was to follow the instrument landing system's glide path toward Runway 23L, and, as soon as they sighted Runway 23R through the cockpit window, they would reorient their aircraft to land on it instead. Between the time of their beginning the approach and the crash, they were advised that the landing runway was 23R four times by approach control or the tower. But the phrase "sidestep" or "sidestep approach" – common aviation parlance in the United States – was never used by Mexico air traffic controllers to Flight 2605 to describe the approach. There was no published visual representation of the sidestep approach available to the pilots. Text remarks for the sidestep approach to 23R described only ceiling and visibility minimums.

Weather conditions were deteriorating during Flight 2605's instrument approach. A 5:00 AM weather report indicated visibility of 2-3 nautical miles depending on direction; by 6:00 AM (shortly after the accident) visibility was described as "zero". Flight 2605 was on short final to the closed runway at 5:42 AM. Cockpit voice recording audio of the last seconds of the flight indicated that the first officer and captain agreed that they were cleared for 23R (not the runway they were still on approach to). The captain further stated that they were in fact (still) on the approach to 23L, saying "No, this is the approach to the goddamned left". Then at a speed of 130 knots the aircraft's main landing gear touched down, left gear on the grass left of runway 23L and right gear on the runway shoulder, producing a force greater than 2 g's. One second later the crew decided to abort the landing and applied go-around power. The flight's first officer began to describe the ILS approach's missed approach procedure, a climb to 8,500 feet, in a "nonurgent, perfunctory manner" as the DC-10 became airborne. Approximately 3.3 seconds after the touch down and in a 10-11 degree nose up attitude, the right main gear collided with a dump truck loaded with 10 tons of earth. Most of the right main gear separated from the aircraft and struck the right horizontal stabilizer. The impact of the landing gear shattered the truck, fatally injuring its driver, and creating a debris field 400m by 100m in area.

The damaged aircraft, still airborne with takeoff thrust engaged, began to bank to the right. The bank angle increased until the flap of the right wing struck the cab of an excavator 1,500 meters from the runway threshold. The aircraft's bank angle continued to increase to the point that the right wing began to cut into the ground and taxiways nearby the closed runway. The end of the right wing eventually struck the corner of an aircraft repair hangar, causing damage to the hangar and also fracturing the DC-10's right wing. It then impacted an Eastern Airlines service building north of both runways, 26 seconds after it initially touched down. This final impact caused the structural breakup of the aircraft, heavily damaged the two story reinforced concrete building, and caused a fire that consumed most of the aircraft structure. One part of the DC-10's left wing travelled well off airport grounds, impacting a residential building on Matamoros Street in the Peñón de los Baños colonia and causing a fire there as well. 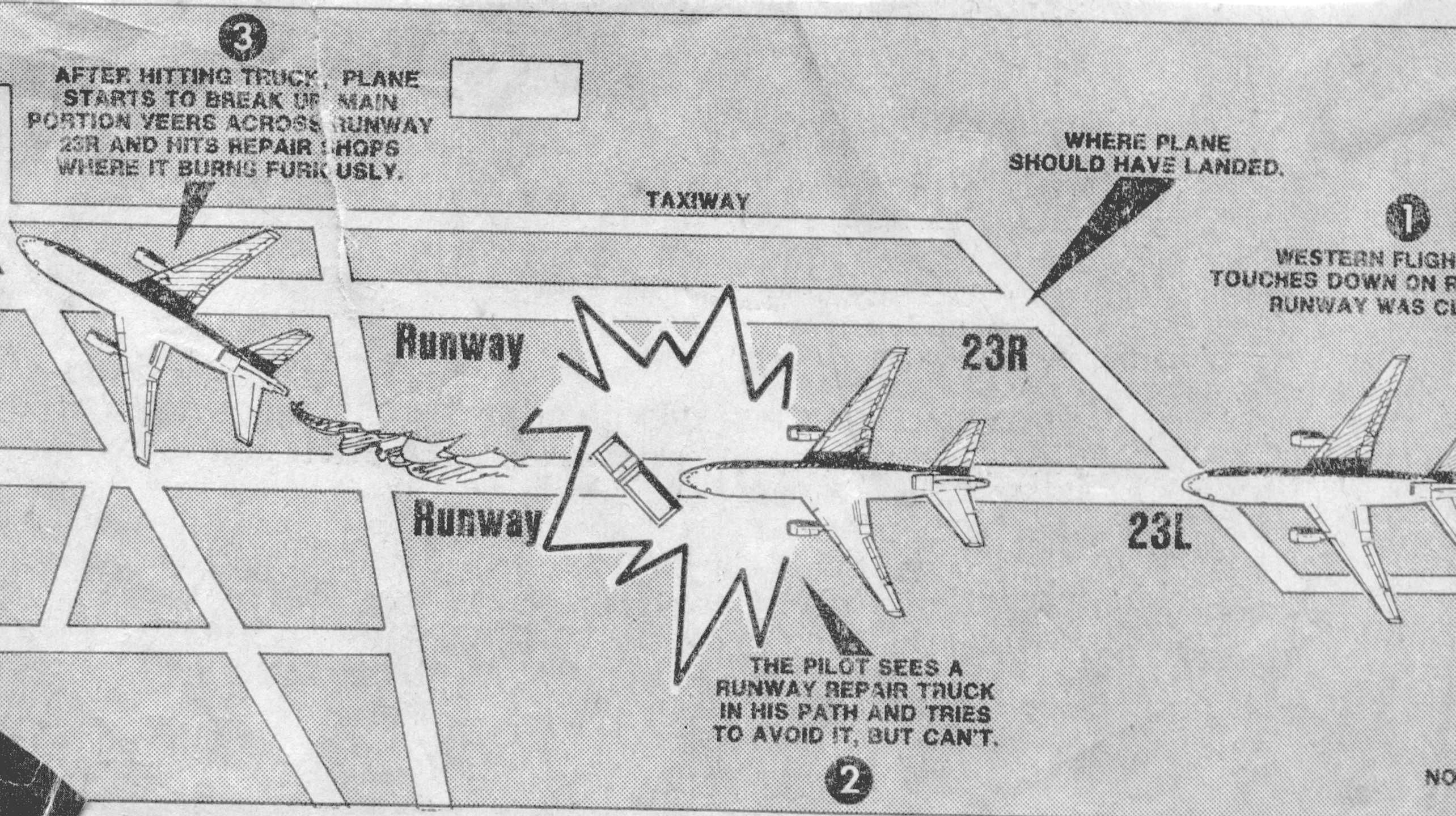 Most survivors of Flight 2605 were found in a 20 foot long section of fuselage that did not burn. Survivors reported that large pieces of the building continued to fall onto the wreckage of the aircraft several minutes after the crash, as rescuers arrived on the scene. 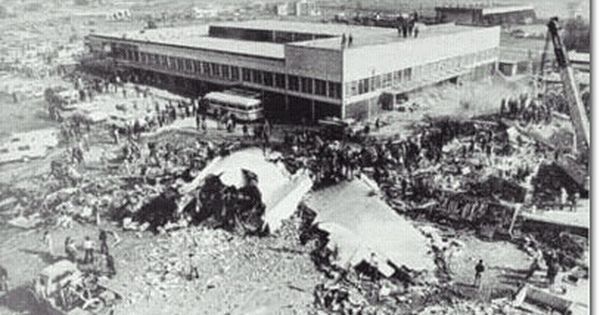