This incident presaged a disaster years later in the crash of the Valujet in the Everglades.
On 3 February 1988, a spontaneous chemical fire smouldered out of sight in the cargo hold of American Airlines Flight 132. On final approach to land, the cabin floor was softening, sinking and simply melting under tremendous heat. A deadheading Co-pilot riding in the passenger cabin who observed the floor told the Co-pilot in the cockpit, '[We're] gonna have to land this thing in a hurry.'

Until this moment, the flight was nothing but routine.

A McDonnell Douglas DC-9, registration N569AA, Flight 132 had departed Dallas-Fort Worth at 14.45 that afternoon destined for Nashville. There were 120 passengers, four flight attendants, and two deadheading flight crew members aboard. The cargo holds contained 6,365 pounds of airfreight. There was a 20-pound cylinder of oxygen and a 104-pound drum of textile treatment chemicals, including five gallons of hydrogen peroxide solution, an oxidizer and 25 pounds of a sodium orthosilicate-based mixture, which is a granular solid material. No labels marked the drum to indicate the hazards of its contents. The oxygen cylinder and the drum were put in the middle cargo hold; the drum was laid on its side.

The Captain ordered the evacuation two minutes and six seconds after Flight 132 touched down, and the inflatable slides were deployed at the two forward cabin doors, the aft galley door and at in the tail cone. The overwing exits were not used. No instructions were given to the passengers over the public address system. Neither were they prepared for the evacuation before landing. During the evacuation, the flight attendants shouted commands at the passengers to 'Unfasten seat belts' and 'Come this way' and 'Remove shoes' and 'Don't take anything with you.'
After the passengers had safely evacuated the airplane, an American Airlines maintenance employee on the ground asked the Captain about the problem. The Captain said there was a fire in the cargo area. They opened the aft cargo compartment and saw little smoke inside. Then they opened the middle cargo compartment. Thick, white/grey smoke poured out.
The Tower's call dispatched 14 firefighters with six vehicles, four crash-fire rescue units and two quick response Units to the aircraft, which had pulled to a stop on the apron beside the runway. The emergency units sprayed about 120 gallons of water into the middle cargo compartment to douse the smouldering fires. Neither aqueous film-forming foam nor dry chemicals to fight fires was used.
None of the 126 crew and passengers was injured seriously; nine passengers and four crew suffered minor injuries. 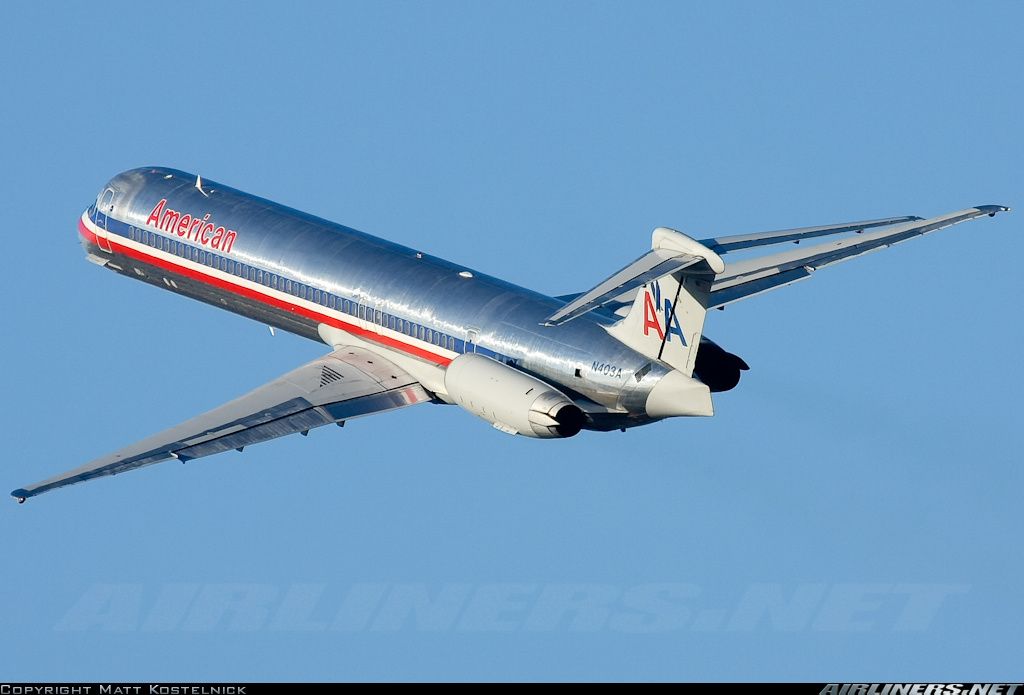 CO-PILOT [speaks in interphone to back of the aircraft]: hello.

Flight ATTENDANT [calling the cockpit on interphone from back of the aircraft]: Hi. We've got smoke in the cabin.

FLIGHT ATTENDANT: We don't know where it's coming from. It's past the, ah, exit. [We] got an H2O extinguisher

the passenger cabin] said the floor is getting really soft, and he said we need to land.

CO-PILOT: Okay. Who says the floor is getting soft?

FLIGHT ATTENDANT: Here he is [handing the interphone to the deadheading Co-pilot].

DEADHEAD: You got the floor back here in the middle…. dropping out slightly.

DEADI-IEAD: You[re] gonna have to land this thing in a hurry.

DEADHEAD: Hey, have the [fire] trucks meet us [once we land].

CO-PILOT TO CAPTAIN: [We] have a flight officer back there, says that the floor is getting soft. [We] probably ought to drop the [landing] gear. There's somethin' going on in the, ah, floor board.

CAPTAIN: Put the gear down.

CO-PILOT TO FLIGHT ATTENDANT: Okay, now how far back is the floor getting
soft?

FLIGHT ATTENDANT: Well, ah, the Captain [deadheading Co-pilot] is in the aisle right
now. He's about midway through to...

co-Pilot: Okay. Why don't you go back and buckle in.

CO-PILOT: [to Flight Attendant on interphone] You don't see any smoke. It's just fumes?

CO-PILOT: Okay. I'm gonna get off the phone. Call me if anything important changes.

CAPTAIN TO Co-PILOT: Did you call the Tower?

CO-PILOT: There's just fumes back there.

CAPTAIN: We've had fumes before, from the APU [Auxiliary Power Unit] is where [it came from] at least initially. Okay, we got [landing] gear.

CAPTAIN: Spoiler lever, auto brakes. No. Flaps are good. Lights. Are we cleared to land?

CO-PILOT TO TOWER: American one thirty-two, are we cleared to land?

CO-PILOT: Roger. [To Captain] Do you want to call any …. [Emergency] equipment on the ground]?

CAPTAIN: We don't have any problems yet. Just a few fumes.

CO-PILOT: You don't smell it?

CO-PILOT: This is my first time in here let me look this up.

DEADHEAD CO-PILOT ON INTERPHONE: You've got a big problem back here, and time in here, so I'm not sure if you…. The problem is, I don't know where the heat is comin' from. It's comin' up through the floor.

CO-I'ILOT: Do you see any smoke?

DEADHEAD: We better get outta here.

CO-PILOT TO CAPTAIN: There's a crew [man] back there that says we better get outta here. He says there's smoke comin through the floor.

FLIGHT ATTENDANT: I don't see it [the smoke]. We had a first officer here with us. He's the one. He's been checkin' the floor. He's in uniform. That's who you've been talkin' to

CO-PILOT TO CAPTAIN: She don't see [the smoke].

CO-PILOT TO Captain: The floor is getting very very soft.

CAPTAIN: Okay, let's get out of here. Call ground

CAPTAIN: Give me the checklist.

CO-PILOT TO GROUND CONTROL: Ah, roger, sir, would you call out the fire equipment? We've got the possibility of some fire, some real hot stuff, in the cargo compartment. The floor is real hot. We're gonna get 'em [the passengers] out.

GROUND CONTROL: Okay, we got 'em on the phone, American one thirty-two.

CAPTAIN: You get out of here. You go help [the Flight Attendants]. Retract brakes. Park fuel levers.