The aircraft deflected across the water several times before it settled in the water and turned clockwise through 210 deg and drifted 460 ft (140 m) south east of the runway 04 extended centreline, with the nose of the aircraft pointing about 265 deg.

The pilot in command (PIC) was the pilot flying, and the copilot was the support/monitoring pilot. An Aircraft Maintenance Engineer occupied the cockpit jump seat. The engineer videoed the final approach on his iPhone, which predominantly showed the cockpit instruments. 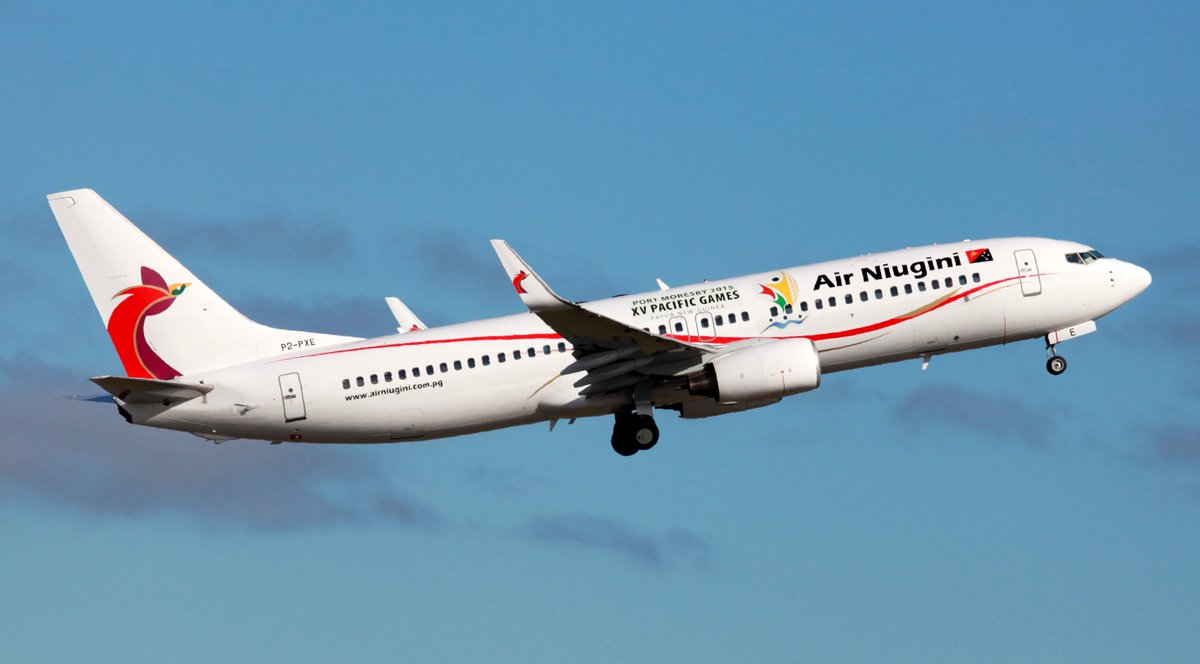 The flight crew did not adhere to Air Niugini SOPM and the approach and pre-landing checklists. The RNAV (GPS) Rwy 04 Approach chart procedure was not adequately briefed.

The RNAV approach specified a flight path descent angle guide of 3º. The aircraft was flown at a high rate of descent and a steep variable flight path angle averaging 4.5º during the approach, with lateral over-controlling; the approach was unstabilised. The Flight Data Recorder (FDR) recorded a total of 17 Enhanced Ground Proximity Warning System (EGPWS) alerts, specifically eight “Sink Rate” and nine “Glideslope”. The recorded information from the Cockpit Voice Recorder (CVR) showed that a total of 14 EGPWS aural alerts sounded after passing the Minimum Descent Altitude (MDA), between 307 ft (364 ft) and the impact point. A “100 ft” advisory was annunciated, in accordance with design standards, overriding one of the “Glideslope” aural alert. The other aural alerts were seven “Glideslope” and six “Sink Rate”.

The investigation observed that the flight crew disregarded the alerts, and did not acknowledge the “minimums” and 100 ft alerts; a symptom of fixation and channelised attention. The crew were fixated on cues associated with the landing and control inputs due to the extension of 40° flap.

Both pilots were not situationally aware and did not recognise the developing significant unsafe condition during the approach after passing the Missed Approach Point (MAP) when the aircraft entered a storm cell and heavy rain. The weather radar on the PIC’s Navigation Display showed a large red area indicating a storm cell immediately after the MAP, between the MAP and the runway.

The copilot as the support/monitoring pilot was ineffective and was oblivious to the rapidly unfolding unsafe situation. He did not recognise the significant unsafe condition and therefore did not realise the need to challenge the PIC and take control of the aircraft, as required by the Air Niugini SOPM. 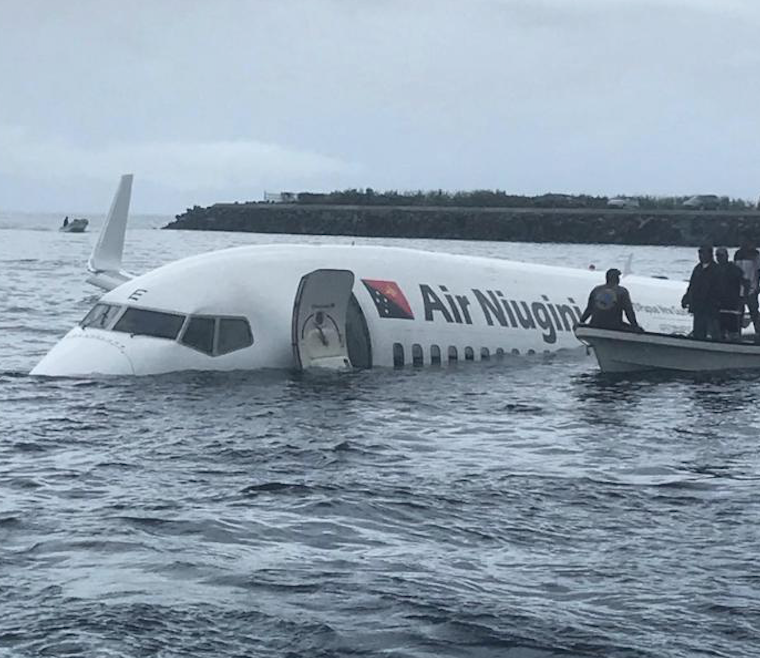 Prior to top of descent (TOD) the crew briefly discussed brake setting for the landing.

The pilots then commenced a discussion about the approach and landing flap setting. The copilot asked the PIC if they should use Flap 30 and the PIC replying “Yeah, Flaps 30 would do. 141 plus 5 ah”. The discussion continued around whether to use Flap 30 or 40. The copilot entered the relevant conditional data into the electronic flight bag (EFB) Boeing OPT and determined that the use of Flap 40 would reduce the landing distance required by about 150 meters. He informed the PIC and the PIC agreed to select Flap 40.

They then discussed the approach and missed approach procedure they would conduct at HAMAX if they found themselves not visual by that point. However, the approach and landing checklist and the briefing on the RNAV approach chart briefings were not conducted in accordance with the SOPs and not using standard phraseology. The missed approach was just a cursory mention of DAMAY and did not cover the procedure, nor the flight path to be followed.

At 22:54:36, San Francisco radio contacted the crew with the following decent clearance: ATC clearance. Niugini 73, descend to reach FL340 by time 23:05Z13, requirement to reach FL340 by time 23:05Z, and report level, FL340. Cruise, FL340, to Chuuk airport, report arrival. Report leaving FL280, flight level 180 and flight level 080, time, time check, 254 and a quarter. At top of descent, the PIC stated to the copilot that they were already high and needed to immediately initiate their descent. The crew commenced their descent leaving FL40014 at 22:56:18, at a descent rate of 944 ft/pm. At FL340, the copilot contacted San Francisco radio and reported that they were maintaining FL340. Both pilots discussed the descent clearance for about two minutes, trying to recall and clarify the instructions that they were given.

At 23:05:14, while maintaining FL340, the PIC stated to the copilot that they were high on profile and needed to descend to get back on the required descent profile.

At 23:15:59, at about 15 nm from Chuuk while passing 8,600 ft, the copilot made an inbound broadcast call stating their intention to track for the RNAV (GPS) runway 04, from the east south-east. Shortly after the broadcast the copilot contacted San Francisco Radio, and reported passing 8,000 ft on descent.

23:21:27 The PIC called for gear down and flaps 15 and stated: “we just configure as we can ah.” The PIC did not complete his instructions to the copilot.

23:22:33 The copilot mentioned to the PIC that there were some showers in the area and the PIC acknowledged by stating: “That must be some storm, but it’ll be out soon.” The PIC called for the landing checklist, but the only readout made by the copilot was landing gear, flaps and lights and runway in sight.

23:23:41 The copilot set the missed approach altitude on the Mode Control and shortly afterwards, when passing 625 ft (677 ft)17, with the aircraft above the 3º glideslope, the PIC disconnected the auto-pilot and stated: “I’m going back on profile.”

23:23:43 When passing 548 ft (602 ft) on descent, the aircraft entered the storm cell and heavy rain and the PIC called for the wipers to be switched on. The PIC stated during the investigation interview that he had already made the decision that it was visual up ahead with the runway edge lighting to continue for landing at that stage. 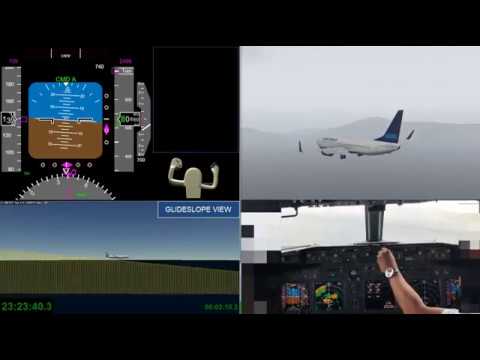 The aircraft was being flown on a RNAV (GPS) approach to runway 04. While the auto-pilot system was engaged, the approach was stabilised, tracking 041º from FIGBI 2,500 ft, passing FASPO at 1,700 ft. The PIC disconnected the auto-pilot at 625 ft (677 ft) and flew the aircraft manually.

The missed approach required a left turn to track 306º with a minimum rate of climb of 375 ft / NM tracking to 960 ft to the Missed Approach Fix DAMAY.

From 548 ft (602 ft) the approach became unstabilised with an excessively high rate of descent and lateral over controlling. During the investigation interviews the PIC explained that from experience, he found the Boeing 737-800 aircraft laterally less stable with Flap 40 compared with the Flap 30 setting.

During the approach at 23:23:53, when the EGPWS Advisory alert (altitude callout) “Minimums” sounded, the aircraft was passing through the published MDA at 420 ft (477 ft) with a rate of descent of 1,490 ft per min. The descent was not arrested by either pilot.

After passing the MAP, the aircraft was progressively flown below the glideslope on an approach path from 411 ft (466 ft) ft to the point of impact that averaged 4.5º. Between the MDA and the impact point, the aircraft flew for another 22 seconds; the EGPWS issued seven Glideslope and six Sink Rate aural alerts.

A storm cell situated immediately after HAMAX, the MAP, was painted on the weather radar on the PIC’s EFIS Navigation Display. The crew continued past the MAP and flew into IMC, through light and subsequently heavy rain. The copilot activated the windscreen wipers. 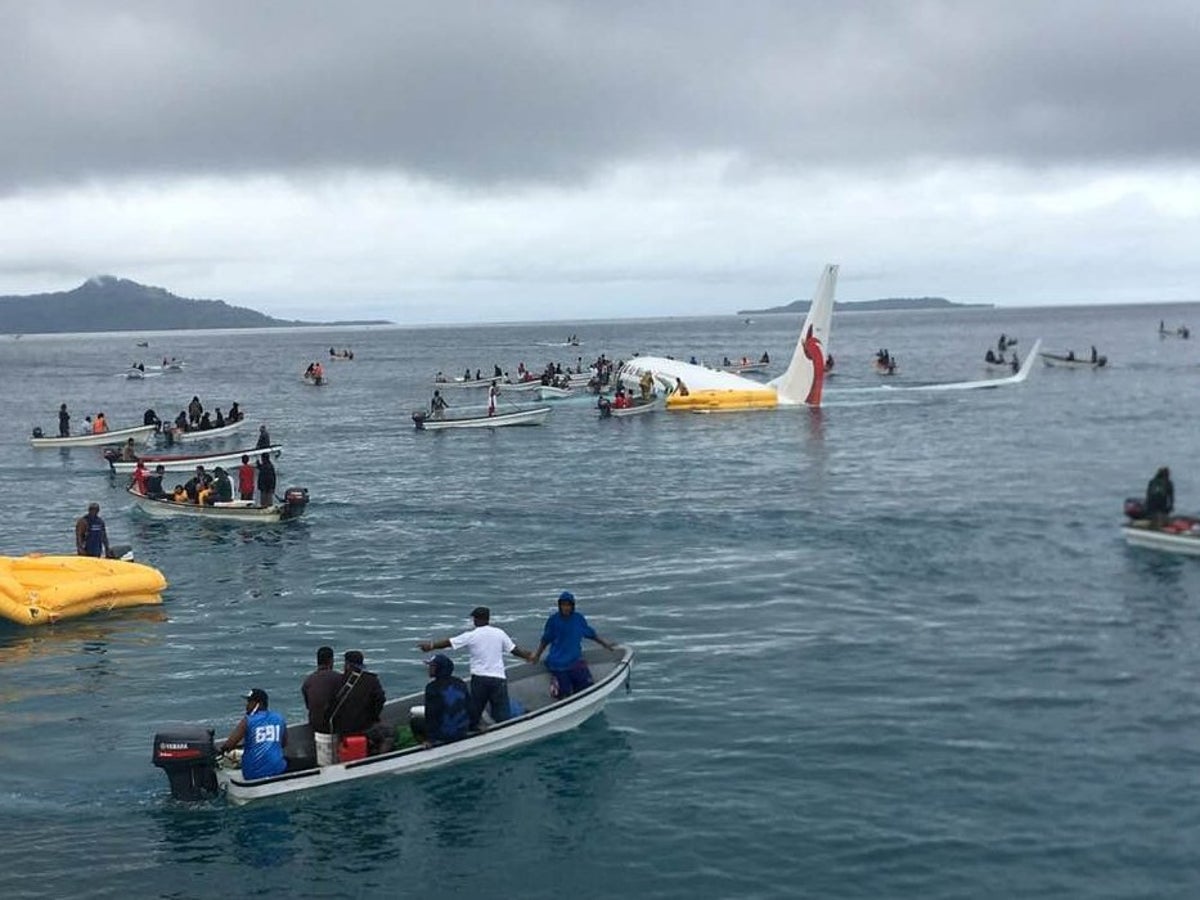