Aloha Airlines Flight 243 was a scheduled Aloha Airlines flight between Hilo and Honolulu in Hawaii. On April 28, 1988, a Boeing 737-297 serving the flight suffered extensive damage after an explosive decompression in flight, but was able to land safely at Kahului Airport on Maui. The only fatality was flight attendant C.B. Lansing who was blown out of the airplane. Another 65 passengers and crew were injured. The safe landing of the aircraft with such a major loss of integrity was unprecedented and remains unsurpassed.

The aircraft, Queen Liliuokalani (registration number N73711), took off from Hilo International Airport at 13:25 HST on 28 April 1988, bound for Honolulu. There were 90 passengers and five crew members on board. No unusual occurrences were reported during the take-off and climb.

Around 13:48, as the aircraft reached its normal flight altitude of 24,000 feet (7,300 m) about 23 nautical miles (43 km) south-southeast of Kahului, a small section on the left side of the roof ruptured. The resulting explosive decompression tore off a large section of the roof, consisting of the entire top half of the aircraft skin extending from just behind the cockpit to the fore-wing area.

As part of the design of the 737, stress may be alleviated by controlled area breakaway zones. The intent was to provide controlled depressurization that would maintain the integrity of the fuselage structure. The age of the plane and the condition of the fuselage (that had corroded and was stressing the rivets beyond their designed capacity) appear to have conspired to render the design a part of the problem; when that first controlled area broke away, according to the small rupture theory, the rapid sequence of events resulted in the failure sequence. This has been referred to as a zipper effect.

First Officer Madeline "Mimi" Tompkins' head was jerked back during the decompression, and she saw cabin insulation flying around the cockpit. Captain Robert Schornstheimer looked back and saw blue sky where the first class cabin's roof had been. Tompkins immediately contacted Air Traffic Control on Maui to declare mayday.

At the time of the decompression, the chief flight attendant, Clarabelle "C.B." Lansing, was standing at seat row 5 collecting drink cups from passengers. According to passengers' accounts, Lansing was sucked through a hole in the side of the airplane.

Flight attendant Michelle Honda, who was standing near rows #15 and #16, was thrown violently to the floor during the decompression. Despite her injuries, she was able to crawl up and down the aisle to assist and calm the terrified passengers. Flight attendant Jane Sato-Tomita, who was at the front of the plane, was seriously injured by flying debris and was thrown to the floor. Passengers held onto her during the descent into Maui.

The explosive decompression severed the electrical wiring from the nose gear to the indicator light on the cockpit instrument panel. As a result, the light did not illuminate when the nose gear was lowered, and the pilots had no way of knowing if it had fully lowered.

Before landing, passengers were instructed to don their life jackets, in case the aircraft did not make it to Kahului.

The crew performed an emergency landing on Kahului Airport's runway 2 at 13:58. Upon landing, the crew deployed the aircraft's emergency evacuation slides and evacuated passengers from the aircraft quickly. First Officer Mimi Tompkins assisted passengers down the evacuation slide. In all, 65 people were reported injured, eight seriously. At the time, Maui had no plan for a disaster of this type. The injured were taken to the hospital by the tour vans from Akamai Tours (now defunct) driven by office personnel and mechanics, since the island only had a couple of ambulances. Air traffic control radioed Akamai and requested as many of their 15 passenger vans as they could spare to go to the airport (less than a mile away) to transport the injured. Two of the Akamai drivers were former medics and established a triage on the runway. The aircraft was a write-off. 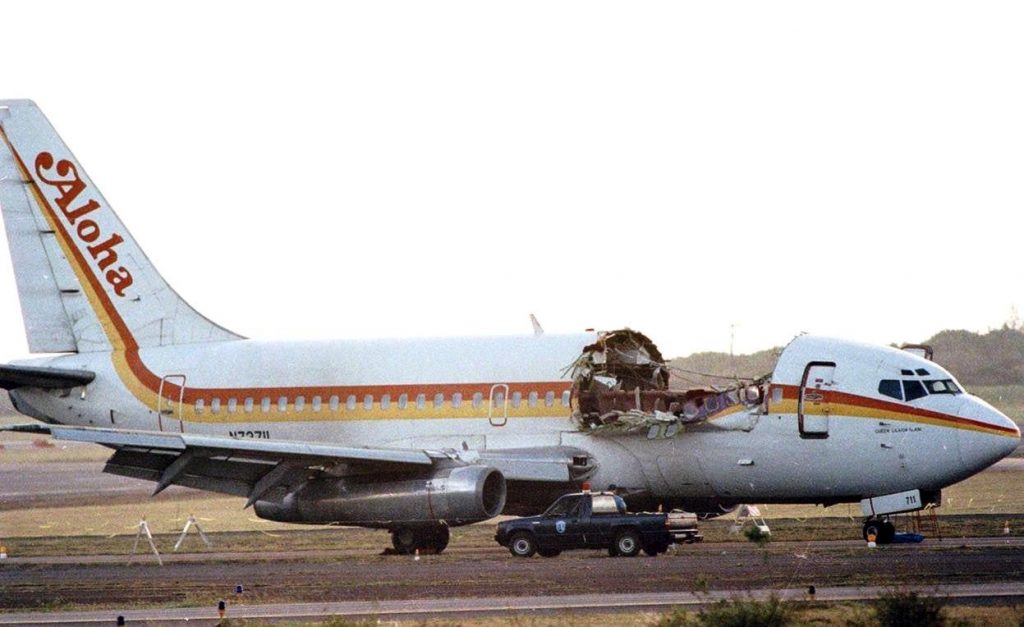 Investigation by the United States National Transportation Safety Board (NTSB) concluded that the accident was caused by metal fatigue exacerbated by crevice corrosion (the plane operated in a coastal environment, with exposure to salt and humidity). The root cause of the problem was failure of an epoxy adhesive used to bond the aluminum sheets of the fuselage together when the B737 was manufactured. Water was able to enter the gap where the epoxy failed to bond the two surfaces together properly, and started the corrosion process. The age of the aircraft became a key issue (it was 19 years old at the time of the accident and had sustained a remarkable number of takeoff-landing cycles — 89,090, the second most cycles for a plane in the world at the time — well beyond the 75,000 trips it was designed to sustain). Aircraft now receive additional maintenance checks as they age. However, several other aircraft operating under similar environments did not exhibit the same phenomenon. A deep and thorough inspection of Aloha Airlines by NTSB revealed that the most extensive and longer "D Check" was performed in several early morning installments, instead of a full uninterrupted maintenance procedure.

According to the official NTSB report of the investigation, Gayle Yamamoto, a passenger, noticed a crack in the fuselage upon boarding the aircraft prior to the ill-fated flight but did not notify anyone. The crack was located aft of the front port side passenger door. The crack was probably due to metal fatigue related to the 89,090 compression and decompression cycles experienced in the short hop flights by Aloha.

In addition, the United States Congress passed the Aviation Safety Research Act of 1988 in the wake of the disaster. This provided for stricter research into probable causes of future airplane disasters.

Both pilots remained with Aloha Airlines. Robert Schornstheimer retired from Aloha Airlines in August 2005. At that time, Madeline Tompkins was still a captain of the airline's Boeing 737-700 aircraft until the airline closed 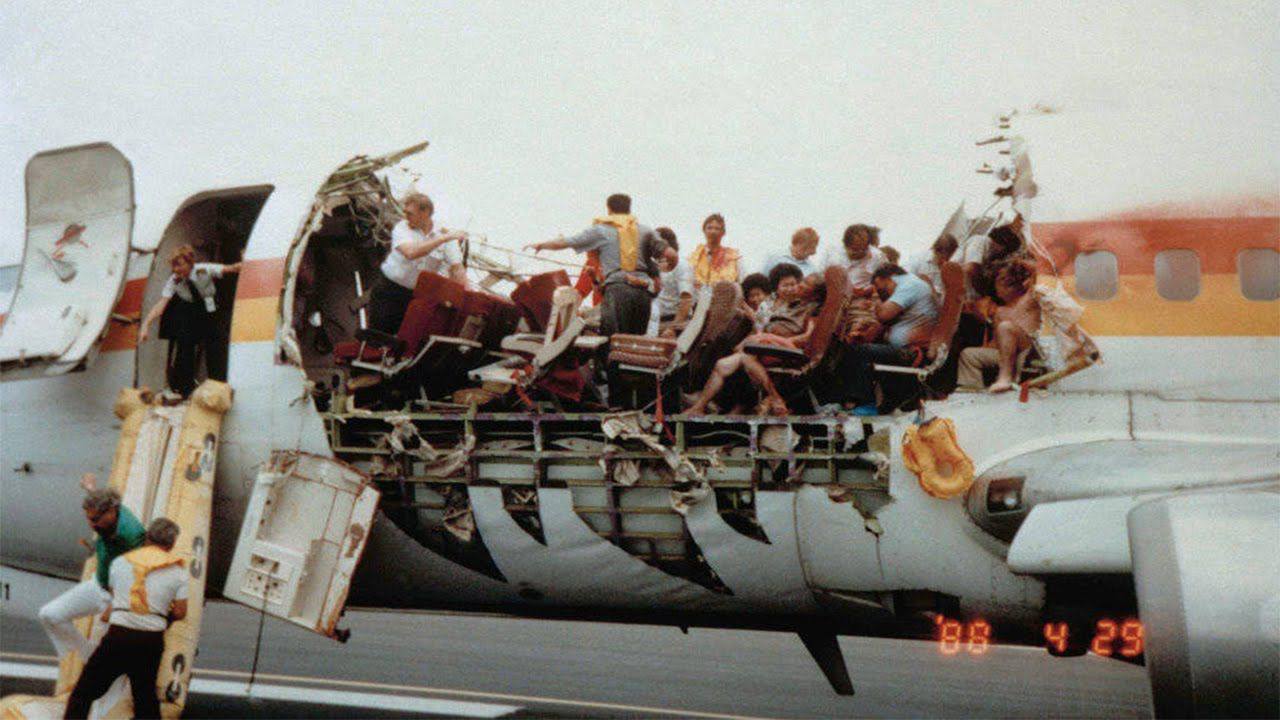 The CVR microphones in the cockpit could not pick up any crew conversation for the next five minutes. However, the CVR recorded the crew’s transmissions with the ground control through the crew’s oxygen mask microphones.

Co-pilot: Maui tower, Aloha two forty three, we’re inbound for landing. We’re just, ah, west of Makena, descending out of thirteen [13,000 feet], and we have rapid depr - we are unpressurised. Declaring an emergency…

Here the crew, having reached 11,000 feet takes off its oxygen masks.

Tower: Two forty - two the equipment is on the the roll. Plan [to approach] straight thousand [ 11,000] feet. Request clearance into Maui for landing. Request the [emergency] equipment.

Tower: Okay, the equipment is on the field…Is on the way. Squawk zero three four three, can you come up on [frequency] one niner one niner point five?

Co- pilot: Two forty three. Can you hear us on one nineteen five two, forty three? Maui Tower, two forty three. It looks like we’ve lost a door. We have a hole in this, ah, left side of the aircraft.

Captain: Here we go. We’ve picked up some of your airplane business right there. I think they can hear you. They can’t hear me. Ah, tell him, ah, we’ll need assistance to evacuate this airplane.

Captain: We really can’ communicate with the flight attendants, but we’ll need trucks, and we’ll need, ah, airstairs from Alhoa.

Co-pilot: All right. [To tower] Maui Tower, two forty three, can you hear me on tower?

Tower: Alhoa two forty three, I hear you loud and clear. Go ahead.

Co-pilot: Ah, we’re gonna need assistance. We cannot communicate with the flight attendants. Ah, we’ll need assistance for the passengers when we land.

Tower: Okay, I understand you’re gonna need an ambulance. Is that correct?

Co-pilot: Can we maintain altitude ok?

Co-pilot: All right you got it.

Tower: Alhoa two forty three, can you give me your souls on board and your fuel on board?

Captain to co-pilot: Do you have a passenger count for tower?

Tower: Okay. And, ah, just to verify. You broke up initially. You do need an ambulance. Is that correct?

Tower: Roger. How many do you think are injured?

Co-pilot: We have no idea. We cannot communicate with our flight attendant.

Tower: Okay. We’ll have an ambulance on the way.

Co-pilot: Okay, be advised. We have no nose gear. We are landing without nose gear.

Tower: Okay if you need any other assistance, advise…

Co-pilot: We’ll need all the [emergency] equipment you’ve got. [To Captain] Is it easier to control with the flaps up?

Captain: Yeah put em’ at five. Can you give me a vee speed for a flaps five landing?

Co-pilot: Do you want the flaps down as we land?

Captain: Yeah after we touch down

Co-pilot to Captain: Want me to go flaps forty…?

Cockpit: [Sound of touchdown on runway]

Captain: Okay. Okay. Shut it down.

Co-pilot: Shut it down.

Tower: Alhoa two forty three, just shut her down where you are. Everything [is] fine. The gear did…The fire trucks are on the way.

Cockpit: [Sound of engines winding down]

Captain: Okay, start the call for the emergency evacuation.