The Air France Concorde, registered F-BTSC, was to depart Paris-Charles de Gaulle for a flight (4590) to New York-JFK. Departure was delayed by about one hour because the crew had requested a replacement of the thrust reverser pneumatic motor of the no.2 engine. Also, the rear bogie truck of the left hand main undercarriage was replaced. When all 100 passengers had boarded, the plane taxied to runway 26R (4217m long).

Take-off weight was calculated to be 186,9 tons, including 95 tons of fuel, which was one tonne over the maximum take-off weight. At 14.42:17h the crew were cleared for takeoff. At 14.42:31h, the captain commenced takeoff. At 14.42:54.6, the co-pilot called one hundred knots, then V1 nine seconds later. A few seconds after that, tyre No 2 (right front) on the left main landing gear was destroyed after having run over a strip of metal lost by a Continental Airlines DC-10-30, registered N13067 which departed Paris as flight 055 to Newark five minutes before.

The destruction of the tyre in all probability resulted in large pieces of rubber being thrown against the underside of the left wing and the rupture of a part of fuel tank 5. A severe fire broke out under the left wing and around the same time engines 1 and 2 suffered a loss of thrust, severe for engine 2, slight for engine 1. By 14.43:13h, as the captain commenced the rotation, the controller informed the crew the presence of flames behind the aircraft. The co-pilot acknowledged this transmission and the flight engineer announced the failure of engine nr.2. Nine seconds later the engine fire alarm sounded and the flight engineer announced "shut down engine 2" then the captain called for the "engine fire" procedure. A few seconds later, the engine 2 fire handle was pulled and the fire alarm stopped. The co-pilot drew the captain's attention to the airspeed, which was 200 kt. At 14.43:30h, the captain called for landing gear retraction. The controller confirmed the presence of large flames behind the aircraft. Twelve seconds later the engine fire alarm sounded again for around 12 seconds. It sounded for the third time at about 14.43:58h and continued until the end of the flight. At 14.43:56h, the co-pilot commented that the landing gear had not retracted and made several callouts in relation to the airspeed. Three seconds later, the GPWS alarm sounded several times. The co-pilot informed ATC that they were trying for Le Bourget aerodrome. Then the number 1 engine lost power as well. The aircraft entered a left turn until control was lost, crashing into hotel 'Hotellisimo' and bursting into flames. 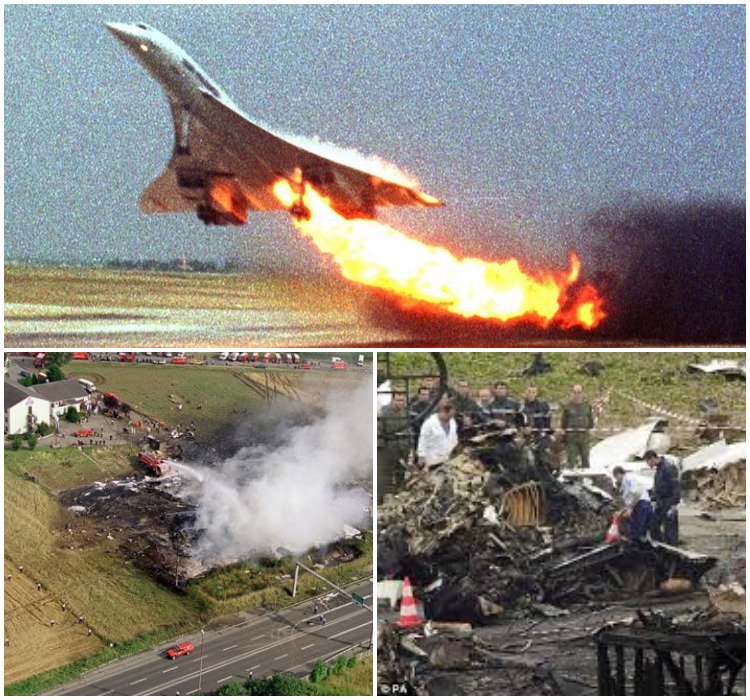 14 h 22 min 22 s, Captain "ok we're going to do one hundred eighty-five one hundred that's to say we'll be at the structural limit", "structural err fifty-four per cent CG (*) see".

14 h 39 min 04 s, Captain "so the takeoff is.... at maximum takeoff weight one hundred eighty tons one hundred which means four reheats with a minimum N2 of a hundred and three and a failure N2 of ninety-eight", "Between zero and one hundred knots I stop for any aural warning the tyre flash", "tyre flash and failure callout from you right", "Between one hundred knots and V1 I ignore the gong I stop for an engine fire a tyre flash and the failure callout", "after V1 we continue on the SID we just talked about we land back on runway twenty-six right".

14 h 41 min 09 s, FE "Brake temperatures checked one hundred fifty". The Captain asks "Is it hotter on the left or the right there?". The FE answers "it's about the same".

Note : the CVR working group had detected a low frequency noise at 14 h 43 min 07 s, during the takeoff roll, which was transcribed in the preliminary transcript. Subsequent advanced filtering work showed that this low frequency noise was in fact present throughout the tape: it is a noise associated with the recording induced by the tape itself or the recording circuit. It was thus removed from the final transcript.

14 h 43 min 13.4 s, message from the controller indicating flames at the rear and read back by the FO.

14 h 43 min 25.8 s, Captain "engine fire procedure" and in the following second the noise of a selector and fire alarm stops.

14 h 43 min 30 s, Captain "gear on retract". In the course of the following eight seconds the crew mention the landing gear several times.

14 h 44 min 14.6 s, FO "Le Bourget Le Bourget" then a few seconds later "negative, we're trying Le Bourget", in reaction to the instructions given to the fire chief by the controller.