Turkish Airlines Flight 1951 (also known as the Poldercrash or the Schiphol Polderbaan incident) was a passenger flight that crashed during landing at Amsterdam Schiphol Airport, Netherlands, on 25 February 2009, resulting in the deaths of nine passengers and crew, including all three pilots. 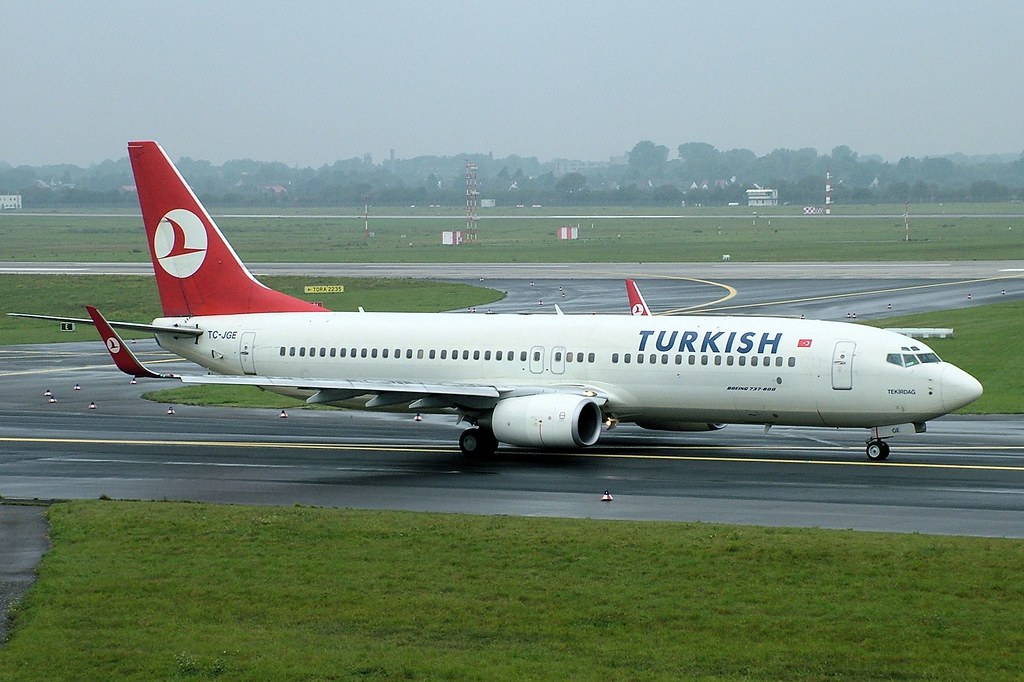 The aircraft, a Turkish Airlines Boeing 737-800, crashed into a field approximately 1.5 kilometers (0.9 mi) north of the Polderbaan runway (18R), prior to crossing the A9 motorway inbound, at 09:26 UTC (10:26 CET), having flown from Istanbul, Turkey. The aircraft broke into three pieces on impact. The wreckage did not catch fire.

The crash was caused primarily by the aircraft's automated reaction, which was triggered by a faulty radio altimeter. This caused the autothrottle to decrease the engine power to idle during approach. The crew noticed this too late to take appropriate action to increase the thrust and recover the aircraft before it stalled and crashed. Boeing has since issued a bulletin to remind pilots of all 737 series and BBJ aircraft of the importance of monitoring airspeed and altitude, advising against the use of autopilot or autothrottle while landing in cases of radio altimeter discrepancies.

A 2020 investigation by The New York Times found that the Dutch investigation into the crash "either excluded or played down criticisms" of Boeing following pressure from Boeing and US federal safety officials, who instead "emphasized pilot error as a factor ... rather than design flaws.

The flight was cleared for an approach on runway 18R (also known as the Polderbaan runway) but came down short of the runway threshold, sliding through the wet clay of a ploughed field.

The aircraft suffered significant damage. Although the fuselage broke into three pieces, it did not catch fire. Both engines separated and came to rest 100 metres (330 ft) from the fuselage.

While several survivors and witnesses indicated that it took rescuers 20 to 30 minutes to arrive at the site after the crash, others have stated that the rescuers arrived quickly at the scene. About 60 ambulances arrived along with at least three LifeLiner helicopters (air ambulances, Eurocopter EC135), and a fleet of fire engines. An unconfirmed report by De Telegraaf (Dutch newspaper) states that the firefighters were at first given the wrong location for the crash site, delaying their arrival. Lanes of the A4 and A9 motorways were closed to all traffic to allow emergency services to quickly reach the site of the crash.

The bodies of the three cockpit crew members were the last to be removed from the plane, at around 20:00 that evening, because the cockpit had to be examined before it could be cut open to get to these crew members. Also, some of the survivors say that at least one of the pilots was alive after the crash. The relatives of the passengers on the flight were sent to Amsterdam by Turkish Airlines shortly afterward.

All flights in and out of Schiphol Airport were suspended, according to an airport spokeswoman. Several planes were diverted to Rotterdam The Hague Airport as well as to Brussels Airport. At about 11:15 UTC (12:15 CET), it was reported that the Kaagbaan runway (06/24) had been re-opened to air traffic, followed by the Buitenveldertbaan runway (09/27).

Turkish Airlines continues to use the flight number 1951 on its Istanbul-to-Amsterdam route, primarily operated by an Airbus A321neo and a Airbus A330. 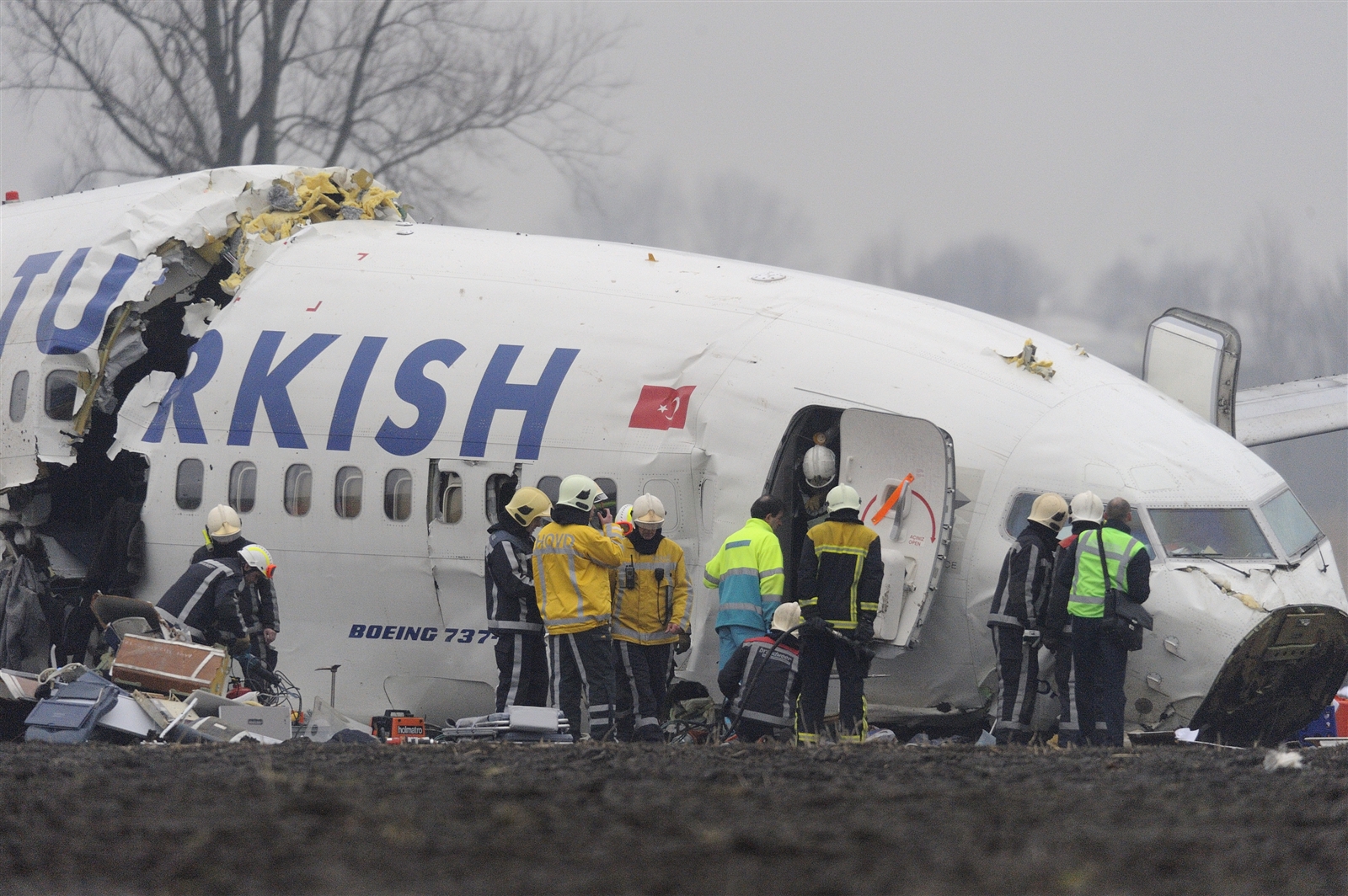 The investigation was led by the Dutch Safety Board (DSB, Dutch: Onderzoeksraad voor Veiligheid or OVV), and assisted by an expert team from Turkish Airlines and a representative team of the American NTSB, accompanied by advisors from Boeing and the FAA, Turkish Directorate General of Civil Aviation (SHGM), the operator, the UK Air Accidents Investigation Branch, and the French Bureau d'Enquêtes et d'Analyses pour la sécurité de l'Aviation Civile (BEA). The cockpit voice recorder and the flight data recorder were recovered quickly after the crash, after which they were transported to Paris to read out the data. The Dutch public prosecution initially asked the DSB to hand over the black boxes, but the DSB refused to do so. It stated that there was no indication of homicide, manslaughter, hijacking or terrorism, which would warrant an investigation by the prosecution.

While on final approach for landing, the aircraft was about 2,000 ft (610 m) above ground, when the left-hand (captain's) radio altimeter suddenly changed from 1,950 feet (590 m) to read −8 feet (−2.4 m) height, although the right-hand (co-pilot's) radio altimeter functioned correctly. The voice recording showed that the crew was given an audible warning signal ("TOO LOW!, GEAR!") that indicated that the aircraft's landing gear should be down, as the aircraft was, according to the radio altimeter, flying too low. Later, the safety board's preliminary report modified this analysis, indicating that the flight data recorder history of the captain's radio altimeter showed 8191 feet (the maximum possible recorded) until the aircraft descended through 1950, then suddenly showed negative 8 feet.

The throttles were pulled back to idle thrust to slow the aircraft to descend and acquire the glideslope, but the autothrottle unexpectedly reverted to "retard" mode, which is designed to automatically decrease thrust shortly before touching down on the runway at 27 feet (8.2 m) above runway height. At 144 kt, the pilots manually increased thrust to sustain that speed, but the autothrottle immediately returned the thrust lever to idle power because the first officer did not hold the throttle lever in position. The throttles remained at idle for about 100 seconds while the aircraft slowed to 83 knots (154 km/h), 40 knots (74 km/h) below reference speed as the aircraft descended below the required height to stay on the glideslope. The stick-shaker activated at about 150 metres (490 ft) above the ground, indicating an imminent stall, the autothrottle advanced, and the captain attempted to apply full power. The engines responded, but there was not enough altitude or forward airspeed to recover, and the aircraft hit the ground tail-first at 95 knots (176 km/h).

The data from the flight recorder also showed that the same altimeter problem had happened twice during the previous eight landings but that on both occasions the crew had taken the correct action by disengaging the autothrottle and manually increasing the thrust. Investigations are under way to determine why more action had not been taken after the altimeter problem was detected. In response to the preliminary conclusions, Boeing issued a bulletin, Multi-Operator Message (MOM) 09-0063-01B, to remind pilots of all 737 series and Boeing Business Jet (BBJ) aircraft of the importance of monitoring airspeed and altitude (the "primary flight instruments"), advising against the use of autopilot or autothrottle while landing in cases of radio altimeter discrepancies. Following the release of the preliminary report, Dutch and international press concluded that pilot inattention caused the accident, though several Turkish news publications still emphasized other possible causes.

On 9 March 2009, the recovery of the wreckage started. All parts of the plane were moved to an East Schiphol hangar for reconstruction.

It was reported that the first officer survived the accident, but that rescuers were unable to reach him via the cockpit door, owing to security measures introduced in the wake of the September 11, 2001 attacks. The rescuers eventually cut their way into the cockpit through the roof, by which time the first officer had died.

The final report was released on 6 May 2010. The Dutch Safety Board stated that the approach was not stabilized; hence, the crew ought to have initiated a go-around. The autopilot followed the glide slope while the autothrottle reduced thrust to idle, owing to a faulty radio altimeter showing an incorrect height. This caused the airspeed to drop and the pitch attitude to increase; all this went unnoticed by the crew until the stick shaker activated. Prior to this, air traffic control caused the crew to intercept the glide slope from above; this obscured the erroneous autothrottle mode and increased the crew's workload. The subsequent approach to stall recovery procedure was not executed properly, causing the aircraft to stall and crash. Turkish Airlines disputed the crash inquiry findings on stall recovery. 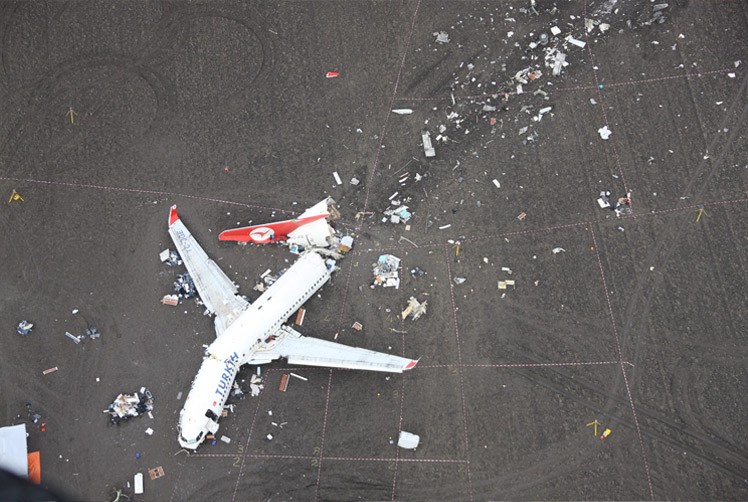