United 811, a Boeing 747-122 (registration number N4713U), took off from Honolulu International Airport bound for Auckland, New Zealand with 3 flight crew, 15 flight attendants, and 337 passengers at approximately 01:52 local time. It was under the command of Captain David Cronin. 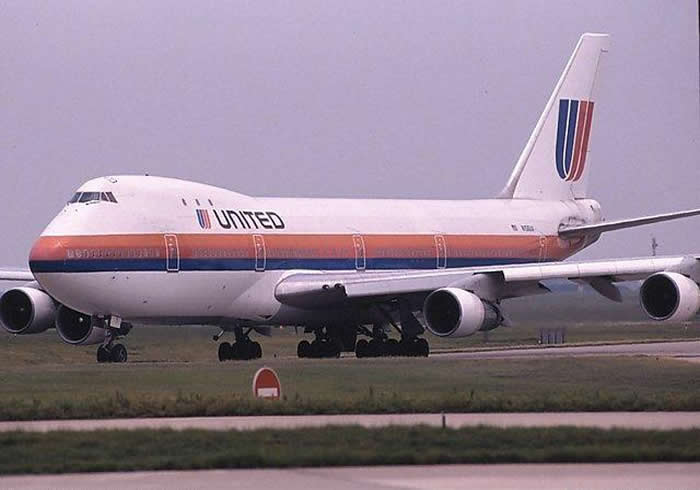 During the climb, the crew made preparations to detour around thunderstorms along the aircraft's track; anticipating turbulence, the captain kept the seat-belt sign lit. Around this time (02:08) the plane had been flying for approximately 16 minutes and was passing between 22,000 and 23,000 feet. In the business-class section, a grinding noise was heard, followed by a loud thud which rattled the whole aircraft—1½ seconds later the forward cargo-door blew out abruptly. The pressure differential caved in the floor above the door, causing two rows of seats (8G-12G and 8H-12H) and an individual in 9F to be ejected from the cabin, resulting in nine fatalities and leaving a gaping hole in the aircraft. The fatalities were: Anthony and Barbara Fallon, Harry and Susan Craig, Lee Campbell, Dr. John Crawford, John Swan, Rose Harley and Mary Handley-Desso. Mae Sapolu a flight-attendant in the Business-Class cabin was also severely injured when she was almost pulled out of the plane too, but survived when she was seen clinging to a seat leg by passengers and fellow crew who pulled her to safety inside the cabin. The pilots began an emergency descent to get the aircraft rapidly down to breathable air, while performing a 180-degree left turn to take them back to Honolulu. The decompression had damaged components of the on-board emergency oxygen supply system, which is primarily located in the forward cargo sidewall area, just aft of the cargo door.

The debris ejected from the plane during the explosive decompression caused severe damage to the number 3 and 4 engines, causing visible fires in both. The crew did not get fire warnings from either of them, although engine 3 was experiencing heavy vibration, no N1 reading, and low EGT and EPR, leading the crew to shut it down. At 02:10, an emergency was declared, and the crew began dumping fuel to get the plane's weight down to an acceptable landing weight. Initially, they pushed the number 4 engine slightly to help force the plane down faster, but once they noticed it was giving almost no N1, high EGT, and was emitting flames, they shut it down as well. Some of the explosively ejected debris damaged the right wing's Leading Edge Devices, dented the horizontal stabilizer on that side, and even struck the tailfin. NTSB reports found human remains in the fan blades of Number 3 Engine, bringing a cold comfort that some of the victims died almost instantly as they were pulled out of the plane. 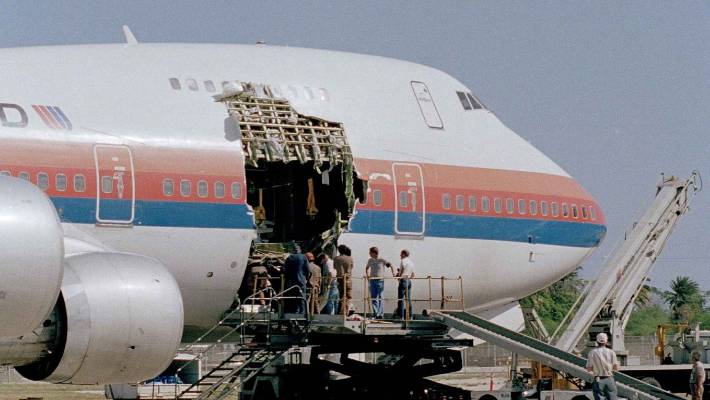 During the course of the descent Captain Cronin had ordered Flight Engineer Randal Thomas to tell the flight attendants to prepare for an emergency landing, however Thomas was unable to contact the flight attendants. Thomas asked the captain if he could go down and find out what was happening. Cronin agreed. Thomas saw severe damage immediately upon leaving the cockpit: the aircraft's skin was peeled off in some areas on the upper deck revealing the frames and stringers. As he went down to the lower deck the magnitude of the damage became obvious as he now saw the gigantic hole in the side of the plane. Thomas came back to the cockpit, visibly pale, and reported that large section of fuselage aft of the Number 1 exit door was open. He concluded that it was probably a bomb, and considering the condition of the plane, it would be unwise to exceed 250 knots (460 km/h). The plane's stall speed was around 240 knots (440 km/h), producing a narrow operating envelope.

As the plane neared the airport, the landing gear was extended; the flaps only partially deployed, as a result of damage sustained following the decompression. This resulted in a landing speed between 190 kts and 200 kts. Regardless, Captain Cronin was able to get the plane to a halt without going off the end of the runway. Fourteen minutes had elapsed since the emergency was declared. Evacuation was carried out and all passengers and flight attendants were off in less than 45 seconds, though every flight attendant suffered some injury during the evacuation, ranging from scratches to a dislocated shoulder.

The accident was most likely caused by improper wiring and deficiencies in the door's design. Unlike a plug door which opens inwards and essentially jams against its frame as the pressure outside drops, the Boeing 747 was designed with an outward-hinging door which, while increasing capacity, required a locking mechanism to keep the door closed. Deficiencies in the design of wide-body aircraft cargo doors were already known since the early 1970s from flaws in the DC-10 cargo door. Despite the warnings and deaths from the 1970s DC-10 incidents, and early Boeing attempts to solve the problems in the 1970s, the problems were not seriously addressed by the aircraft industry until much later.

The 747's cargo door utilized a series of electrically-operated latch cams with which the latch pin locks in, the cam then rotating into the closed position. A series of L-shaped arms called locking sectors, actuated by the moving of a lever to close the door, are designed to reinforce the latch cams and prevent them from rotating into the unlocked position. The locking sectors were made out of aluminum, and of too thin a gauge to actually be able to keep the latch cams from moving into the unlocked position against the power of the door motors. An electrical switch designed to cut electrical power to the cargo door when the outer handle was closed was faulty; the motors could still draw power. It appeared in this case that a short circuit in the aging plane caused an uncommanded rotation of the latch cams, which forced the weak locking sectors to unlock; the pressure differential and aerodynamic forces then blew the door off the fuselage, causing the massive decompression. 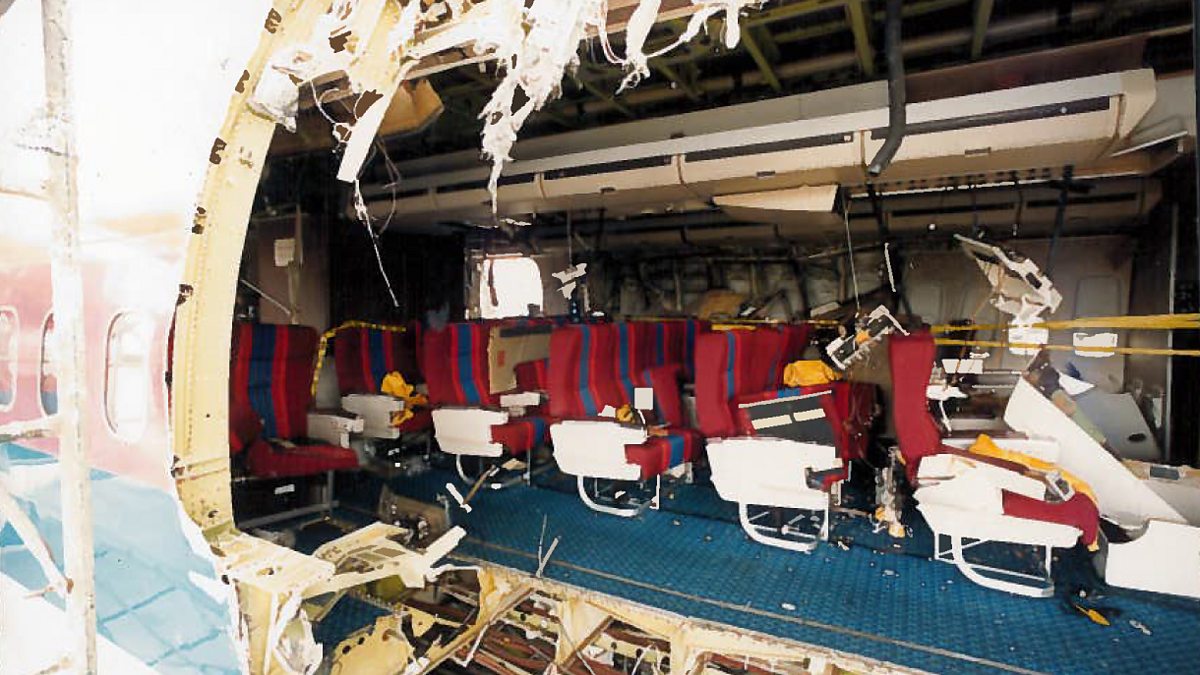 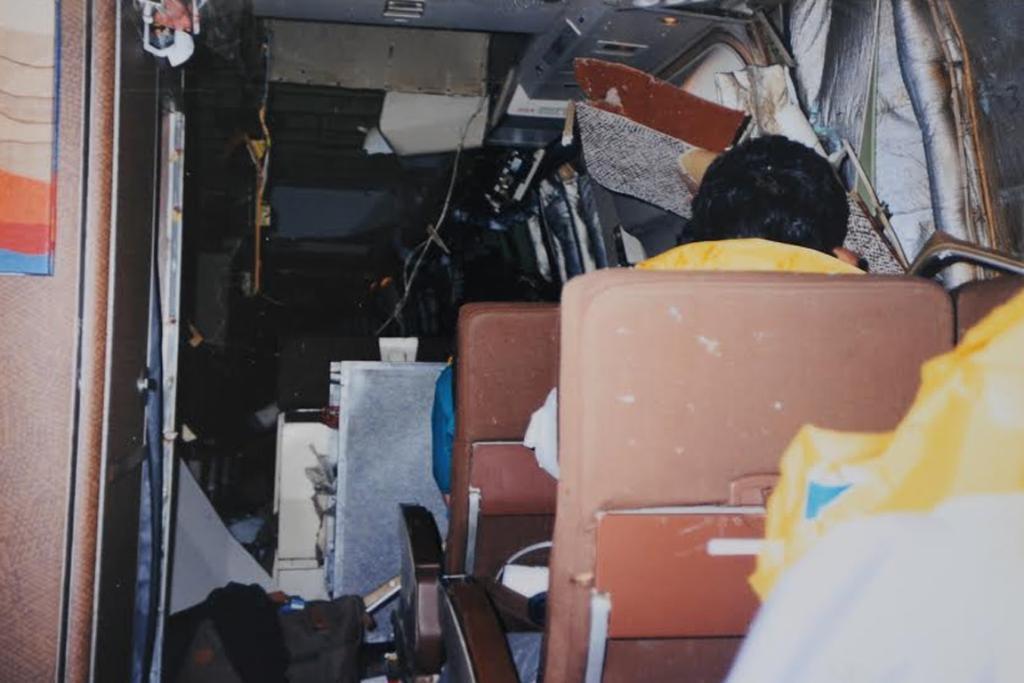