American Airlines Flight 965, a Boeing 757 registered N651AA, was a scheduled flight from Miami International Airport in Miami, Florida to Alfonso Bonilla Aragón International Airport in Cali, Colombia, which crashed into a mountain in Buga, Colombia on December 20, 1995, killing 151 passengers and 8 crew members. The crash was the first U.S.-owned 757 accident and the highest death toll of any accident in Colombia. It is also the highest death toll of any accident involving a Boeing 757 at that time. It was surpassed by Birgenair Flight 301 which crashed on 6 February, 1996 with 189 fatalities. It was the deadliest air disaster involving a U.S. carrier since the downing of Pan Am Flight 103 on December 21, 1988.
Four passengers survived the crash, all of whom were seated in the same row. 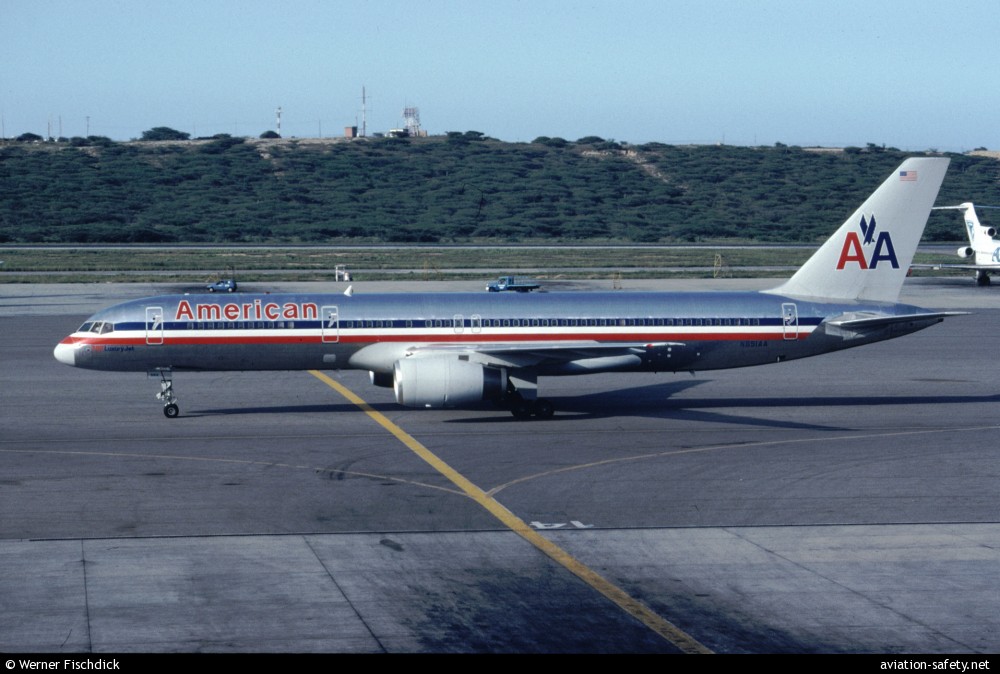 At that time, Flight 965 mainly carried people returning to Colombia for the Christmas holiday, vacationers, and businesspeople. A winter storm in the northeast United States caused the airline to delay the departure of the airliner for thirty minutes to allow for connecting passengers to board the flight, so Flight 965 pushed back from gate D33 in Miami at 5:14 pm, and then taxied to runway 27R, but seasonal congestion caused the Boeing 757 to take off two hours late. Some other passengers booked on Flight 965 missed the flight due to missed connections.

Due to an attack by anti-government guerrillas in 1992, Cali's air traffic controllers had no radar to monitor the 757 as the pilots flew the approach using the area's radio navigation aids and the airport's instrument approach system. Cali's approach uses several radio beacons to guide pilots around the mountains and canyons that surround the city. The airplane's flight management system already had these beacons programmed in, and should have, in theory, told the pilots exactly where to turn, climb, and descend, all the way from Miami to the terminal in Cali.

Since the wind was calm, Cali's controllers asked the pilots if they wanted to fly a straight-in approach to runway 19 rather than coming around to runway 01. The pilots agreed, hoping to make up some time. The pilots then erroneously cleared the approach waypoints from their navigation computer. When the controller asked the pilots to check back in over Tuluá, north of Cali, it was no longer programmed into the computer, and so they had to pull out their maps to find it. In the meantime, they extended the aircraft's speed brakes to slow it down and expedite its descent. 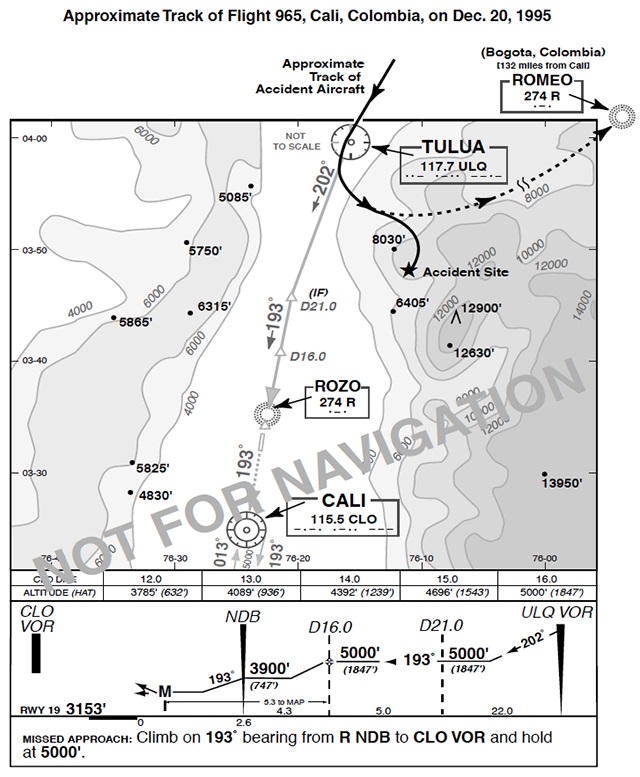 By the time they found Tuluá's coordinates, they had already passed over it. In response to this, they attempted to program the navigation computer for the next approach waypoint, Rozo. However, the Rozo NDB was identified as R on their charts. Colombia had duplicated the identifier for the Romeo NDB near Bogotá, and the computer's list of stored waypoints did not include the Rozo NDB as "R", but only under its full name "ROZO". In cases where a country allowed duplicate identifiers, it often listed them with the largest city first. By picking the first "R" from the list, the captain caused the autopilot to start flying a course to Bogotá, resulting in the airplane turning east in a wide semicircle. By the time the error was detected, the aircraft was in a valley running roughly north-south parallel to the one they should have been in. The pilots had put the aircraft on a collision course with a 3,000-meter mountain. The air traffic controller believed that some of the requests of the pilots did not make sense, but did not know enough non-aviation English to convey this.

Twelve seconds before the plane hit the mountain, the Ground Proximity Warning System activated, announcing an imminent terrain collision and sounding an alarm. The captain and first officer attempted to climb clear of the mountain, but the deployed speed brakes reduced the rate of climb and the aircraft hit the mountain near its summit. Research has shown that the aircraft would probably have cleared the terrain if the crew had immediately retracted the speed brakes when the GPWS alarm sounded.

2125:40 First Officer: Well let's see, we got a hundred and thirty six miles to the VOR, and thirty two thousand feet to lose, and slow down to boot so we might as well get started.

2126:42 Captain (radio): American Airlines operations at Cali, this is American nine six five, do you read?

2126:51 Captain (radio): Alright Cali. we will be there in just about twenty five minutes from now, and go ahead the weather.

2127:00 AAL Cali Ops: OK sir, the the change over, the temperature is twenty three degrees. the altimeter, the (QNH) is two nine point nine eight. conversion is two six point seven one.

2128:05 Captain: And I'm gonna put the headlights on early here because there's a lot of VFR and who knows what good deal. so the headlights might just help us a little bit.

2129:23 Captain (cabin PA): Uh ladies and gentlemen, this is captain Tafuri. We have begun our descent for landing at Cali. It's a lovely evening as we had expected. We'll pass a shower or two on the way in but uh, at the field right now it's uh, good visibility, the temperature is two three, that's twenty three degrees Celcius, and if you prefer Fahrenheit, that's seventy two degrees on the Fahrenheit scale. The winds are ten miles an hour from the northwest. It's a very very pretty evening. I'd like to thank everyone for coming with us. Again, I apologize for, being late tonight. These things do happen sometimes, very frustrating but there wasn't very much we could do about it. Again I appreciate your patience in the matter. Like to wish everyone a very very happy holiday, and a healthy and prosperous nineteen ninety six. Thank you for coming with us.

2131:H Captain: You want me to call for the water or do you want to wait till we get on the ground, 'bout your water?

2134:13 Captain (radio): One one niner decimal one. Feliz navidad seniorita.

2136:31 Cali Approach: Sir the wind is calm. Are you able to approach runway one niner.

2136:52 Captain (radio): Cleared the VOR DME to one nine, Rozo one arrival. Will report the VOR, thank you sir.

Passing 17,358 feet, speed brakes deployed 50%, and increased to 75% and then 98% over the next 42 seconds. Airspeed starts to decrease from 302 knots. The speed brakes remain deployed for the remainder of the flight..

2137:29 Captain (radio): Can American Airlines uh, nine six five go direct to Rozo and then do the Rozo arrival sir?

2137:36 Cali Approach: Affirmative. take the Rozo one and runway one niner, the wind is calm.

2140:01 Captain (radio): And American uh, thirty eight miles north of Cali, and you want us to go Tulua and then do the Rozo uh, to uh, the runway, right? To runway one nine?

2140:27 Cali Approach: Report uh, five thousand and uh, final to one one, runway one niner.