Airwave Flight 9807 departed Moncton around 23.48h for a courier flight to Montreal. At 00.15:15 the airplane was assigned a "block" altitude clearance between FL140 and FL150. At 00.25:21, the flight crew asked for, and received clearance to climb to FL160. At 00.29:56, the flight crew declared an emergency and requested vectors for the nearest airport. The aircraft descended out of control and crashed on the eastern side of the Meduxnekeag River. It appeared that the crew experienced a failure of the airplane's number one engine, prior to declaring an emergency to air traffic control.
The pilot-in-command was the owner and president of Airwave Transport. He had accumulated about 6,000 hours of total flight experience, of which 500 hours were as Gulfstream I pilot-in-command. The co-pilot had about 600 hours of total fight experience, of which 300 Gulfstream I hours. 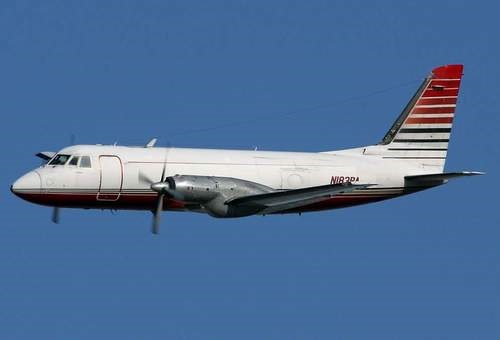 PROBABLE CAUSE: "The pilot-in-command's failure to maintain minimum control airspeed, which resulted in a loss of control. Factors in this accident were clouds, and a loss of engine power for undetermined reasons, while in cruise flight above the airplane's single engine service ceiling."

Photo of a Grumman G-159 Gulfstream I