On December 18, 2003, about 1226 central standard time, Federal Express Corporation (FedEx) flight 647, a Boeing MD-10-10F (MD-10), N364FE, crashed while landing at Memphis International Airport (MEM), Memphis, Tennessee. The right main landing gear collapsed after touchdown on runway 36R, and the airplane veered off the right side of the runway. After the gear collapsed, a fire developed on the right side of the airplane. Of the two flight crewmembers and five nonrevenue FedEx pilots on board the airplane, the first officer and one nonrevenue pilot received minor injuries during the evacuation. The post crash fire destroyed the airplane's right wing and portions of the right side of the fuselage. Flight 647 departed from Metropolitan Oakland International Airport (OAK), Oakland, California, about 0832 (0632 Pacific standard time) and was operating under the provisions of 14 Code of Federal Regulations (CFR) Part 121 on an instrument flight rules flight plan. 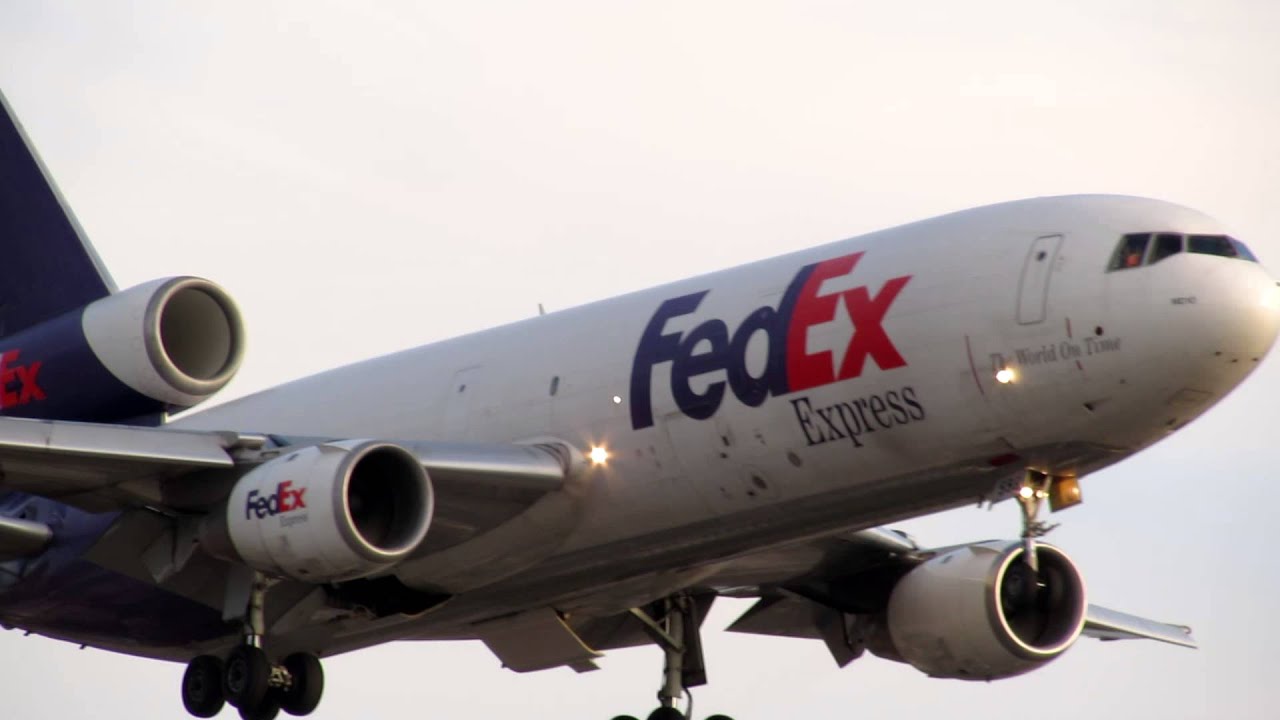 The captain and first officer remained in Oakland on December 17, with no flight duties assigned, then reported for duty on December 18 before the accident flight's scheduled departure time of 0810 (0610 Pacific standard time). The airplane's departure to MEM was delayed until 0832 because of a package sorting issue that was later resolved. The first officer was the flying pilot, and the captain performed the nonflying pilot and line check airman duties.

According to post accident interviews, cockpit voice recorder (CVR) and flight data recorder (FDR) evidence, and air traffic control (ATC) records, the climb and cruise phases of the flight were routine and uneventful. As the airplane approached MEM, the captain and first officer discussed procedures and runway options and planned for the arrival at MEM. About 1145:40, the first officer briefed the captain on arrival and approach procedures for runways 27 (the primary landing runway option) and 36L (the secondary landing runway option). According to the CVR, about 1156:39, the captain stated, "I need to see a stable approach at a thousand feet. If for some reason we're not stable go around...all right?" The first officer responded, "yep no problem there."

The captain obtained the current MEM automatic terminal information service (ATIS) information and, about 1200:34, stated that the winds were out of "three twenty...sixteen gusts to twenty-two, so...it's more favorable to the three sixes." About 1202:08, the first officer stated, "I just think we should start putting out slats about twenty miles on the other side...because I'm...still fairly unfamiliar with Memphis, so I wanna get configured a bit earlier for that." The captain responded, "do what you want," and provided additional information about normal arrival operations, addressing typical stepdown and traffic pattern procedures, altitudes, airspeeds, and the probability of an early turn into MEM. The first officer acknowledged the information and requested the in-range checklist. About 1203:22, the captain stated, "you're driving and you stay focused on that and make me do whatever you need done." The first officer stated, "okay."

About 1219:00, the captain stated that the localizer was "alive" and that they were 18 miles from touchdown. About 10 seconds later, the MEM approach controller told the pilots to reduce the airplane's airspeed to 170 knots and cautioned them about possible wake turbulence from an Airbus airplane that was about 6 1/2 miles ahead of the flight 647 airplane. The captain acknowledged the speed reduction and stated that he was looking for the Airbus airplane. About 1219:24, the first officer stated, "flaps twenty two please," and the CVR then recorded the sound of two clicks. About 1219:28, the captain stated, "I got an Airbus right there...and another one out there looks...about level with us." About 20 seconds later, the MEM approach controller cleared flight 647 to descend to and maintain 2,000 feet. About 1220:20, the captain advised the first officer that they had intercepted the localizer, adding, "we're not yet cleared for the approach." The first officer responded, "that's noted."

About 1222:31, the captain stated, "how 'bout four extra knots. I don't like to add extra speed, but you know, three or four knots can make a lot of difference...if you're bumpin' around back and forth." The first officer responded, "good enough...let's go with ah landing gear down. Before landing checklist, please...glideslope's alive." The captain responded, "Spoilers are armed. The gear's down...and three green. Flaps are twenty two. Flaps to go." About 1223:38, the first officer requested 35° of flaps, and the captain acknowledged and complied with this request. About 1223:52, the CVR recorded a single central aural warning system (CAWS) "tailwind shear" alert. The captain stated, "okay, it's all right," and the first officer stated, "goodness."

About 1224:27, the CVR recorded the CAWS callout "one thousand" as the airplane descended through 1,000 feet above ground level (agl). The captain then stated, "visual. Stable. We got a nine thousand foot runway...and we land at a hundred and forty six. A pretty good headwind oughta work out okay." About 1224:52, the first officer stated, "autopilot's coming off." About 1225:02, the captain stated, "checklist is complete. You're cleared to land," and the first officer responded, "thanks." Between about 1225:08 and about 1225:52, the CVR recorded the CAWS altitude alerts for 500, 100, 50, 40, 30, 20, and 10 feet agl followed by the sounds of touchdown about 1225:53. About 1225:56, the first officer stated, "wow," and the CVR recorded the sound of increasing background noise, similar to increased engine rpm, and the sound of rumbling that was increasing in volume. 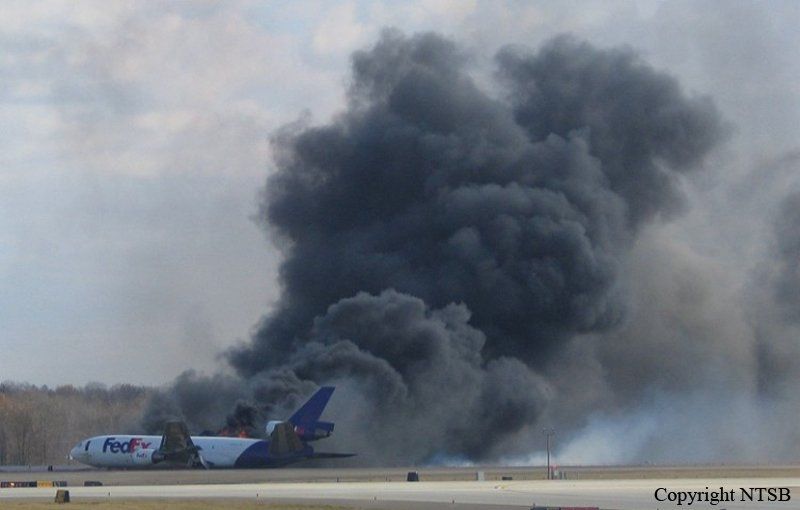 1) The captain and first officer were properly certificated and qualified in accordance with, and had received the training and rest time prescribed by, Federal regulations and company requirements. The flight crewmembers possessed valid and current medical certificates appropriate for Part 121 flight operations.

2) Based on the available evidence, fatigue was not a factor in this accident. Although the cockpit voice recorder recorded the first officer coughing and clearing her throat numerous times, she stated that she was not sick, and there is no evidence that this (the coughing/clearing her throat) adversely affected the flight or her performance.

3) The accident airplane was properly certificated and maintained and was equipped and dispatched in accordance with applicable regulations and industry practices. There was no evidence of any preexisting powerplant, system, or structural failure.

4) The accident airplane's cargo and its loading were not factors in the accident.

5) Differences between the MD-11 and MD-10 handling characteristics during the landing phase were not an issue in this accident.

6) Air traffic control was not a factor in the accident.

7) The atmospheric conditions encountered during the approach and landing were within the performance capabilities of the airplane; there was no evidence of significant windshear.

8) The first officer did not properly apply control wheel and rudder inputs to align the airplane with the runway centerline or apply appropriate back pressure on the control column to arrest the airplane's rate of descent before touchdown; as a result, the airplane touched down extremely hard while still in a crab.

9) The captain, who was conducting a line check of the first officer, did not adequately monitor the first officer's performance during the final stages of the approach and landing at Memphis and failed to take or initiate corrective action to prevent the accident.

11) A proactive program, similar in concept to FedEx's Enhanced Oversight Program, in which flight crewmembers who have demonstrated performance deficiencies or experienced training failures are identified and given additional oversight and training, would be beneficial to flight safety.

12) The nonrevenue FedEx pilot who opened the L1 emergency exit mistakenly pulled both the manual inflation and slide/raft disengage handles because he was not sufficiently familiar with their operation, thus separating the slide/raft from the L1 doorsill.

13) The guidance contained in the flight crew emergency training section of Federal Aviation Administration Order 8400.10 (Air Transportation Aviation Inspector's Handbook) is not adequate for principal operations inspectors to use in ensuring that emergency exit door/slide training for flight crewmembers is as comprehensive as that which cabin crewmembers receive and is as comprehensive as intended by the regulation.

14) FedEx's inadequate hands-on emergency procedures training and the differences between the trainer and the door/slide installation on the accident airplane contributed to the unintentional release of the slide/raft.

15) Most of the FedEx pilots on board the accident airplane showed poor judgment and exposed themselves to unnecessary risk when they delayed their evacuation from a burning airplane to salvage personal items.

16) The Rural/Metro Fire Department aircraft rescue and firefighting (ARFF) response vehicles were unnecessarily delayed in providing ARFF assistance because the Memphis air traffic control tower ground controller did not give them priority over other nonemergency airport traffic; under other circumstances, this could have adversely affected ARFF efforts.

17) Air traffic control tower controllers should recognize the importance of relaying all available pertinent information, including airplane occupant information, to aircraft rescue and firefighting (ARFF) personnel to assist them in ARFF efforts and decision making. 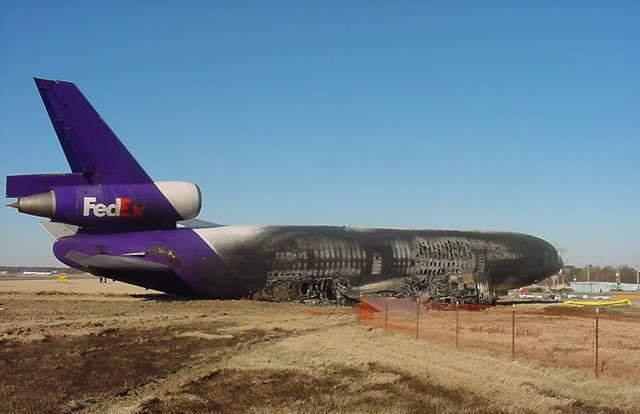