Prior to departure, the flight crew confirmed that the 'windy, rainy and stormy' weather would move out of New York and proceed northeast up into the Hyannis area. Arriving in the Hyannis Airport area, at night, the crew received the ATIS, which stated that winds were from 040 degrees at 20 knots, gusts to 33 knots. The ILS Runway 15 approach was in use. Braking action was reported poor by a Cessna 402, and all surfaces were covered with a patchy thin layer of snow and ice. The PIC determined that the tailwind component for the ILS Runway 15 approach would have exceeded the airplane's limitations, and requested the ILS Runway 24 approach. The airplane touched down about 2,640 feet beyond the approach end of the 5,425- foot long runway. The airplane impacted the localizer antenna, departed the end of the runway, went through a chain link fence, crossed a two-lane road, struck three vehicles on the road, continued into a parking lot, and impacted concrete barriers and two parked vehicles. Examination of the airplane revealed a takeoff and landing card (TOLD) on the instrument panel. Written on the card was the landing distance calculated as 3,050 feet and a notation of 'BA POOR'. At the time of the accident the runway was covered with a 1/2-inch accumulation of ice and snow. According to the Dassault DA-900 Airplane Flight Manual (AFM) Limitations Section, the maximum allowable tailwind component at landing was 10 knots. According to the DA-900 Performance Manual, the maximum safe crosswind on icy runways was 5 knots. The manual also stated, 'For icy runway conditions, landing distance is 3 times the landing distance on dry runway.' Using the factor of 3 and a 10 knot tailwind, a landing distance was computed to be about 10,800 feet. No factors were published for a 20 knot tailwind. 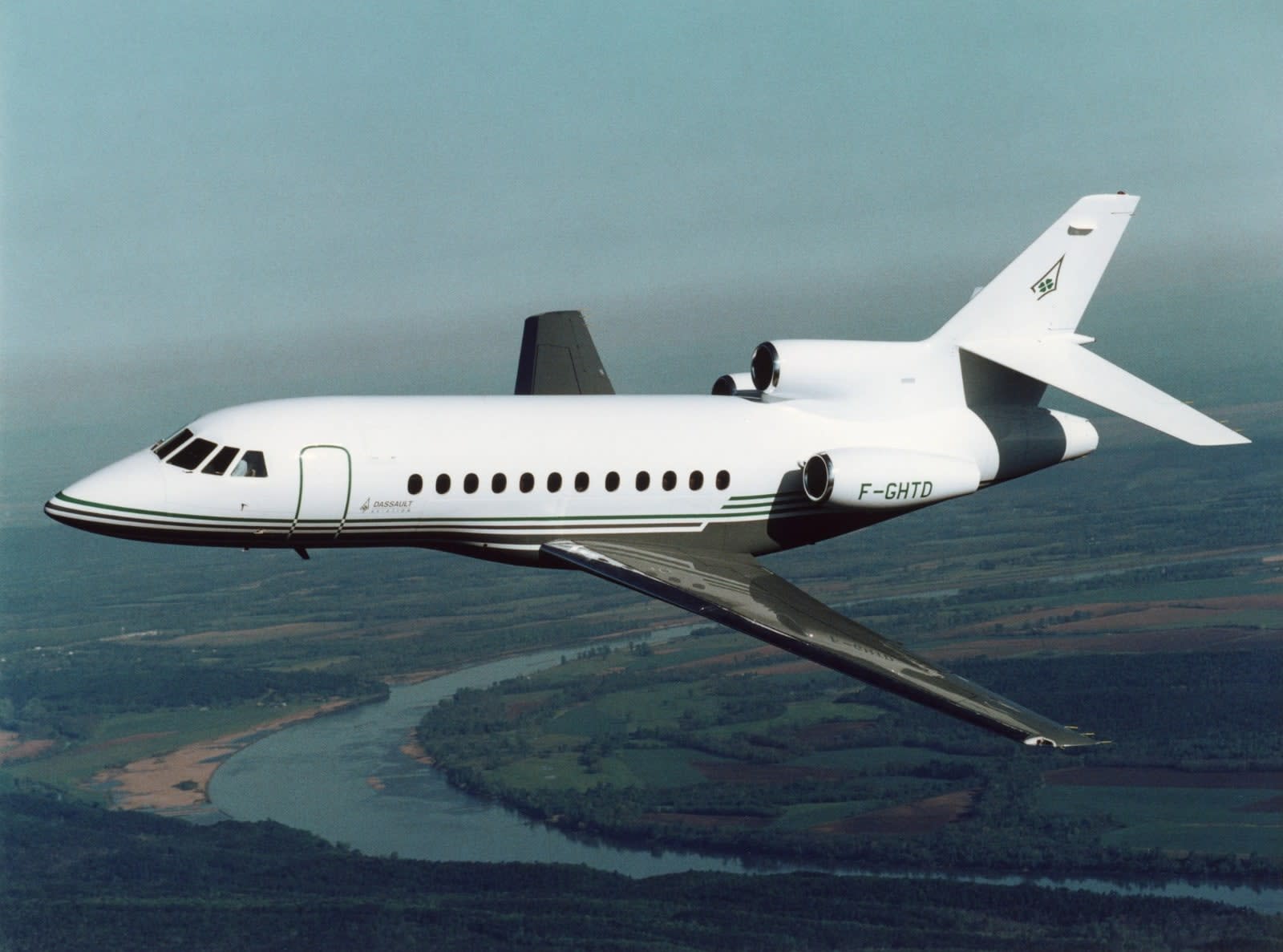 On March 17, 2000, about 1802 Eastern Standard Time, a Dassault DA-900, N814M, operated by BP Amoco Corporation, was substantially damaged when it overran the runway while landing at Barnstable Municipal-Boardman/Polando Field (HYA), Hyannis, Massachusetts. The two certificated airline transport pilots and two passengers were not injured. Two occupants of vehicles on a public road received minor injures. Instrument meteorological conditions prevailed, and an instrument flight rules flight plan was filed for the executive/corporate flight that originated from the La Guardia Airport (LGA), Flushing, New York. The flight was conducted under 14 CFR Part 91. According to the pilot-in-command (PIC), the VOR Runway 6 approach to HYA had been briefed prior to departing LGA. Arriving in the Hyannis area, the crew received the ATIS "Mike", issued at 1650, which stated that winds were from 040 degrees true at 20 knots, gusts to 33 knots, 1/2 statute mile visibility, snow and freezing fog. Cloud conditions were 900 feet broken, 1,400 feet broken, and 2,000 feet overcast. The ILS Runway 15 approach was in use. The crew determined that the visibility for the VOR Runway 6 approach was below minimums, and the PIC determined that the tailwind component for the ILS Runway 15 approach would have exceeded the airplane's limitations. The PIC requested the ILS Runway 24 approach, and the airplane was then vectored to, and cleared for that approach. During an interview, the PIC stated that he made the decision during the approach that he would land the airplane if the braking action was reported as fair, and discontinue the approach if it was reported as poor. The PIC further stated that the airplane was configured to land, and that he flew the glideslope to the runway. After touchdown, he applied maximum reverse thrust and braking, and called for the "air brakes." As the airplane continued down the runway, he noticed an acceleration, and a lack of braking effectiveness. However, he decided not to attempt a go-around, but opted to "rid[e] it out to the end." A Federal Aviation Administration (FAA) inspector, who arrived at the airport shortly after the accident, stated that the airplane departed the end of the runway, slid through the Runway 24 localizer antenna array and a chain link fence. With a 200-foot section of the chain link fence attached to the number two engine pylon, the airplane crossed a two-lane road and struck three vehicles that were traveling on the road. The airplane continued into a parking lot, and impacted four concrete parking barriers. It then impacted three cement parking lot light fixture bases and two parked vehicles, before coming to a stop. During the overrun, the airplane's left and right wing fuel tanks ruptured. The Massachusetts Department of Environmental Protection estimated that approximately 1,200 gallons of Jet-A fuel spilled from the airplane after it came to a stop. A witness, who was standing outside of the airport operations building, stated that he had an unobstructed view of Runway 24 when he observed the accident airplane approach the runway. The witness estimated that the airplane touched down at a point 2,500 beyond the approach end. The airplane continued another 1,500 feet until the thrust reverser was deployed. As the airplane passed the operations building, the speed was excessive for the remaining runway.

The witness then realized that the airplane was not going to stop on the airport property and proceeded to a rescue vehicle. The FAA inspector and a representative from the Commonwealth of Massachusetts Aeronautics Commission examined Runway 24 after the accident. They observed one set of tire tracks in the snow on the runway that correlated to the ground track of the accident airplane. The tire tracks began about 2,640 feet from the approach end of the runway, which was about 2,785 feet from the departure end. According to the passenger seated in the main cabin of the airplane, he could see snow outside the window and it was extremely windy, as the airplane passed though 3,000 feet in it's decent to HYA. As the airplane passed through 1,500 feet, he could see the ground continuously and the airplane was "fighting" to stay level. The airplane was at a very steep angle of decent until touchdown. As the airplane was landing, he could see snow covering the runway and the airplane was not decelerating. The passenger did not recall where the airplane touched down on the runway, or if he had heard the thrust reversers or seen the wing spoilers. The passenger did recall that there was a heavy exhaust noise after the landing. A pilot, who was flying a Piper PA-31 the night of the accident, stated that he had flown from HYA about 1715, and returned to the airport area around 1745. He recalled that the weather conditions were, winds from 070 degrees at 28 knots and gusting. The visibility was about 2 1/2 miles, with an indefinite ceiling. The decision was made to land on Runway 6. After landing, the airplane was turned off of the runway at taxiway Bravo due to the high winds slowing the airplane down after landing. The pilot did not recall if he made a braking action report to the tower, but estimated the conditions as poor, due to the depth of snow and ice on the runway.