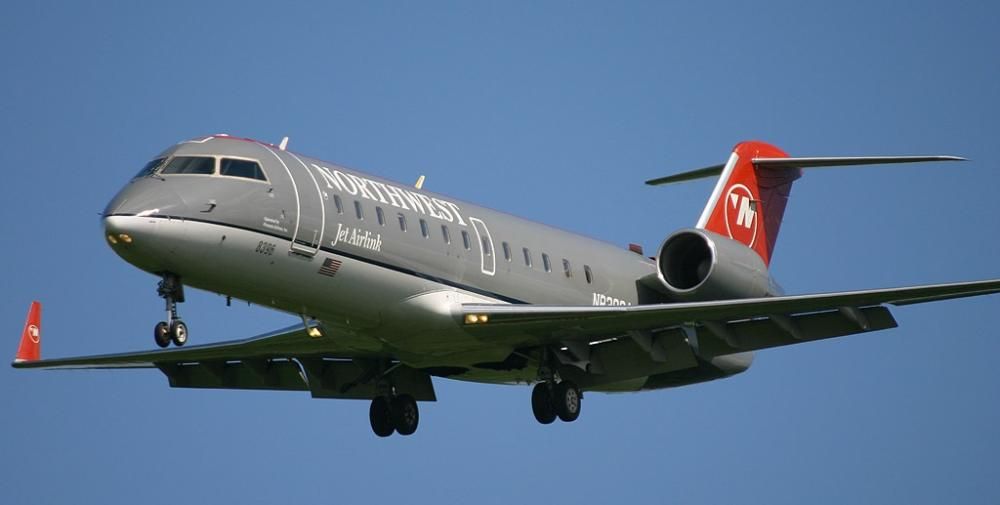 Due to urgent but routine maintenance, the aircraft was unavailable for a scheduled flight earlier in the day. As do many airlines, Pinnacle had a spare aircraft available, which it used. The aircraft involved in the accident was then required at Minneapolis-St. Paul International Airport, where it would have been had it undertaken its originally scheduled flight. For this reason it was necessary to ferry the aircraft to MSP.

The investigation into the accident focused mainly on information contained on the flight data recorder and the cockpit voice recorder. This is the official version of events as determined by that investigation.

The two pilots were exploiting the performance of the empty CRJ-200 on the ferry flight. The pilots decided to test the limits of the CRJ, and join the "410 Club," referring to pilots who pushed CRJs to their maximum approved altitude of Flight Level 410 (41,000 feet).

The incident started when the pilots performed several non-standard maneuvers at 15,000 feet, including a pitch-up at 2.3g (23 m/s²) that induced a stall warning. They set the autopilot to climb at 500 ft/min to FL410. This exceeded the manufacturer's recommended climb rate at altitudes above FL380. In the attempt to reach FL410, the plane was pulled up at over 1.2g, and the angle of attack became excessive to maintain climb rate in the thinner upper atmosphere. After reaching FL410, the plane was cruising at 150 knots (280 km/h), barely above stall speed, and had over-stressed the engines. 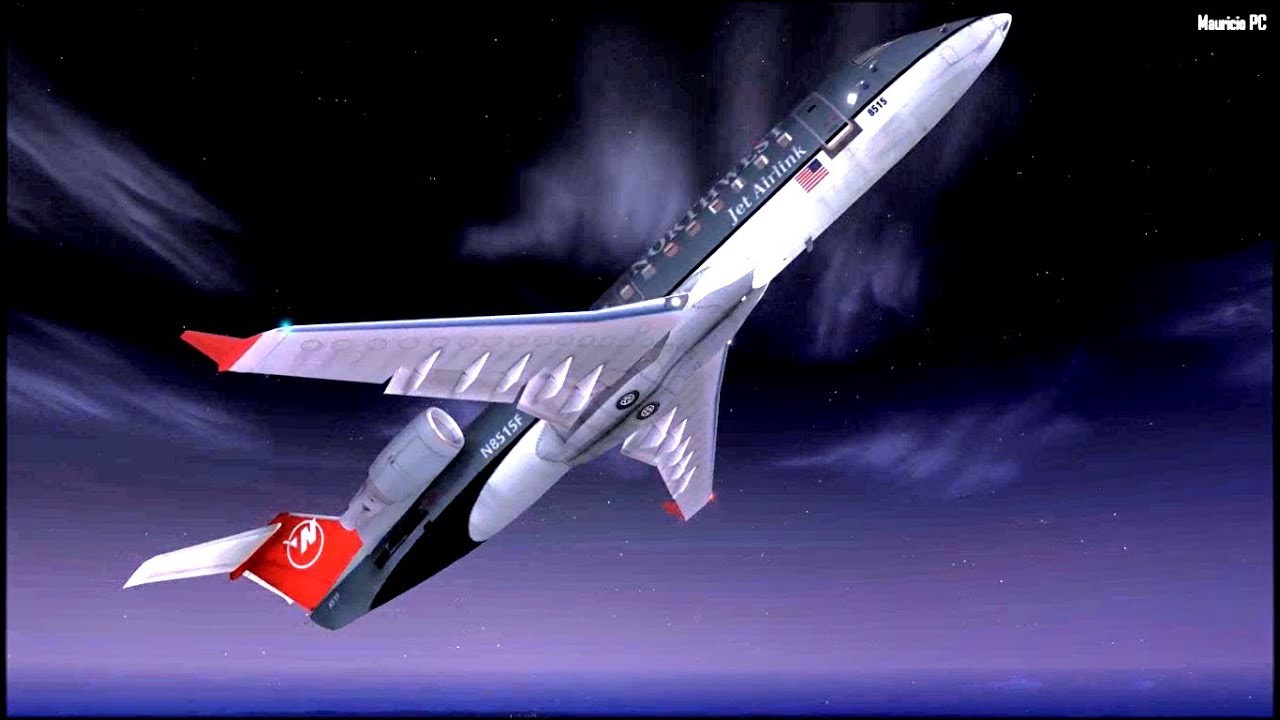 The anti-stall devices activated while they were at altitude, but the pilots overrode the automatic nose-down that would increase speed to prevent stall. After four overrides, both engines experienced flameout and shut down. The plane then stalled, and the pilots recovered from the stall at FL380 while still having no engines. At that altitude, there were six airports within reach for a forced landing. This led the pilots to pitch nose down in an attempt to restart the engines, which requires a dive sharp enough to attain the required 300 kt for a windmill restart to make the blades in the turbines windmill at 10% N2. The captain did not take the necessary steps to ensure that the first officer achieved the 300-knot or greater airspeed required for the windmill engine restart procedure and then did not demonstrate command authority by taking control of the airplane and accelerating it to at least 300 knots.

However, the turbine blades expanded contacting the honeycomb labyrinth seals allowing the metal to scrape on each other when the engine overheated with zero core rotation. When the engine is shutdown at altitude, the core begins to cool and the stator, including the static Interstage Static Seal (ISS), contracts at a faster rate than the adjacent rotating parts in both the radial and axial direction because of its faster thermal time constant. The relative rate of cooling of the stator and rotor results in an alignment of the rotating seal knife-edges aft of the normal operating groove in the static seal. If the clearances are tight enough and the relative cooling rates are right, contact can occur between the static and rotating seal elements. The resulting stiction can temporarily prevent the rotor from turning when only the force of ram air is applied to the core. Air turbine starter (ATS) torque has been shown adequate to overcome this situation. NTSB Accident Information Brief Update for October 29, 2004 Thus, when the engine cooled, the assembly did not match anymore and the blades could not rotate freely. The crew ended the descent when they had reached 230 kt but neither engine core (N2) ever indicated any rotation during the entire descent. Since they were too high for an APU start, the ram air turbine (known as an "Air Driven Generator" on Bombardier products) was deployed to power the aircraft, and the crew donned oxygen masks as the cabin slowly depressurized due to loss of pressurization air from the engines.

The crew glided for several minutes. The crew then tried to restart engines using the APU at 13,000 ft. This was again unsuccessful. They then declared to Air Traffic Control (ATC) that they had a single engine flameout. At this point they had four diversion airports available to them. After continuing unsuccessfully to attempt to restart both the left engine (two times) and the right engine (two times) for over 14 minutes, while utilizing the emergency restart procedure, much altitude was lost. Despite their four auxiliary power unit-assisted engine restart attempts, the pilots were unable to restart the engines because their cores had locked. Without core rotation, recovery from the double engine failure was not possible. It was after these unsuccessful attempts that they declared to ATC that they had in fact lost both engines.

Unable to reach the assigned diversion airport, Jefferson City Memorial Airport, they crashed six minutes later outside Jefferson City, Missouri, behind a row of houses (the 600 block of Hutton Lane — two-and-a-half miles short of the airport), and the plane caught fire. Both pilots were killed. There was some damage to houses and a garage, but no one on the ground was hurt. 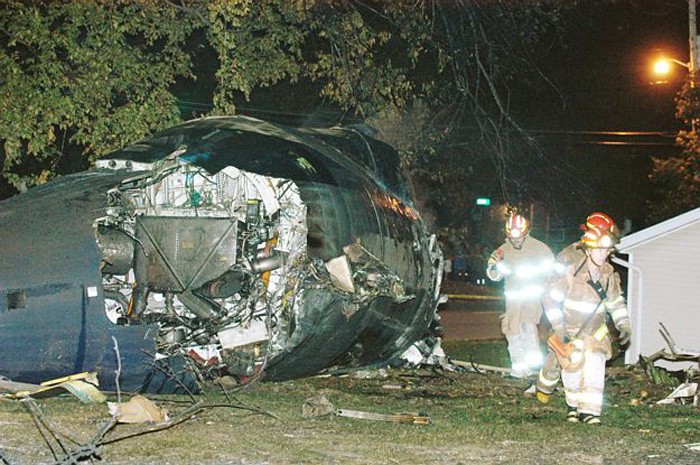 When a jet engine is shut down suddenly at high torque, high altitude, and it isn't restarted immediately, metal parts inside the engine cool and contract at different rates. In rare cases, metal contacts metal, preventing the core from rotating freely. This condition, encountered during this flight, is called core lock. The Air Line Pilots Association suggested that core lock was the primary cause of the accident, but the pilots made a series of poor, and potentially fatal, decisions irrespective of whether the engines experienced core lock. Later it was discovered that the blades of the right, more overstressed engine melted partially, making it impossible to restart. The left engine was less damaged but also failed to restart.

Pinnacle Airlines has restricted flights to a maximum of FL370. It has also changed its training program to include high altitude operations in ground school and simulator training. In addition, each crew is taken in the simulator up to FL410 and shown what the airplane did on the night Flight 3701 crashed.

The National Transportation Safety Board has determined from the Flight Data Recorder that the turbofan jet engine (General Electric CF34-3B1) engine 2 turbine was operating at 300 °C above the maximum redline temperature of 900 °C at 41,000 ft. Engine 1 HPT stayed 100 °C below the redline.

In its final Accident Report, the NTSB determined as the probable causes of the accident:

"The pilots' unprofessional behavior, deviation from standard operating procedures, and poor airmanship;
the pilots' failure to prepare for an emergency landing in a timely manner, including communicating with air traffic controllers immediately after the emergency about the loss of both engines and the availability of landing sites;
the pilots' improper management of the double engine failure checklist. " 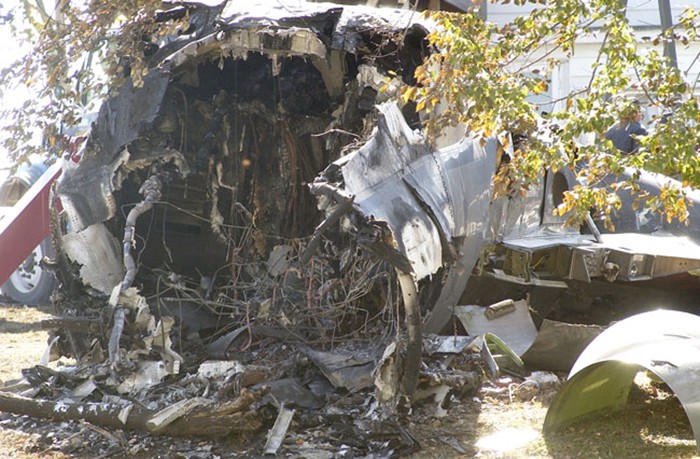