US-Bangla Airlines Flight 211 (BS211/UBG211) was a scheduled international passenger flight by US-Bangla Airlines from Shahjalal International Airport in Dhaka, Bangladesh to Tribhuvan International Airport in Kathmandu, Nepal. On 12 March 2018, the aircraft serving the flight, a 78-seater Bombardier Dash 8 Q400, crashed on landing, and burst into flames. There were 67 passengers and 4 crew members on board; 52 people died, while 19 survived with injuries. 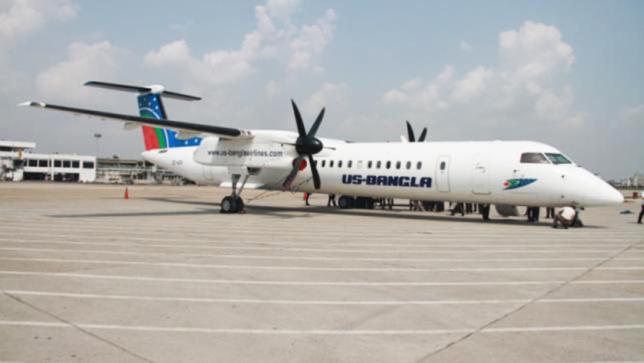 There was confusion and conflicting communications between the pilot and the airport tower control. The tower initially gave clearance to land on runway 02 but then had to warn the aircrew that they were approaching runway 20. Further conversation between the pilots and the control tower continued to confuse the runways.

At 14:18 (08:30 UTC), the aircraft passed the threshold of runway 02 and touched down, then veered off the runway and crashed through the airport's perimeter fence and onto a soccer field, breaking into several sections and bursting into flames. According to eyewitnesses, the plane was not aligned properly with the runway. One of the survivors noted that "the plane had begun to behave strangely". Ground workers stated that the aircraft swayed repeatedly. Another survivor recalled that while the plane was landing it shook violently and crashed, followed by loud bangs. 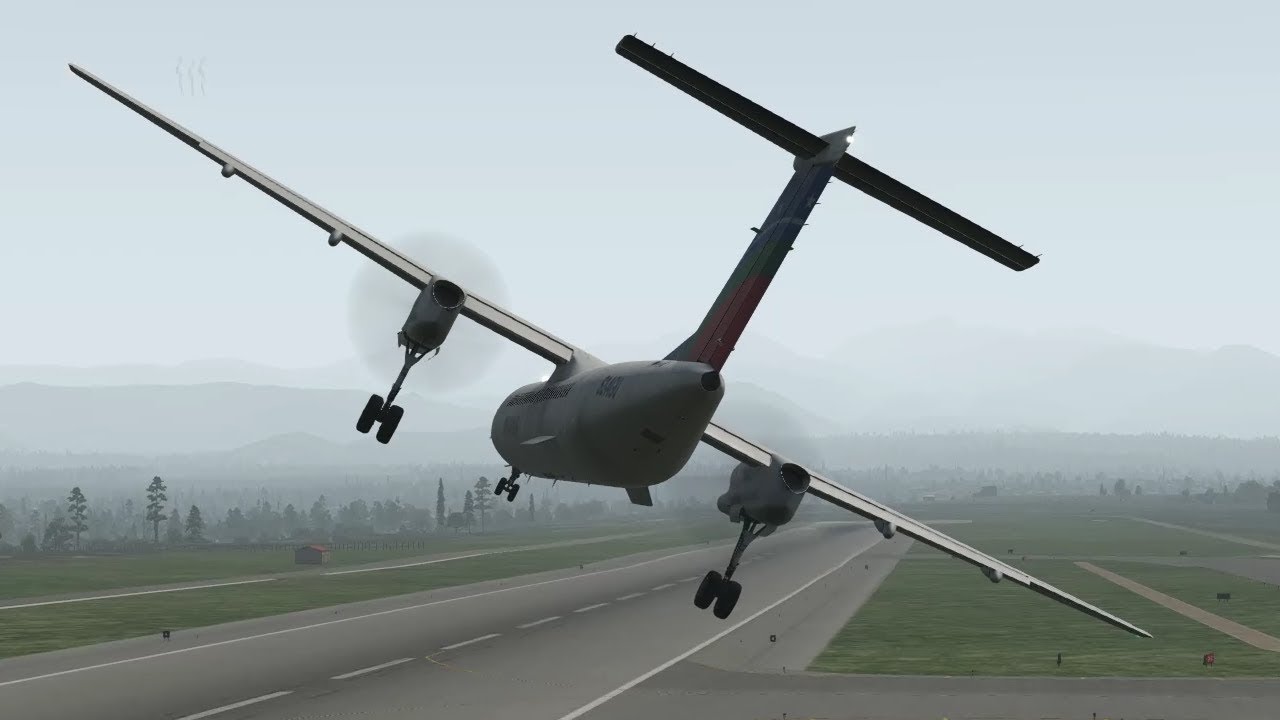 Firefighters and emergency services were immediately deployed. It took 15 minutes for firefighters to douse the flames. Thirty-one people were transported to several hospitals in Kathmandu, many of them critically injured. Rescue workers immediately found eight bodies on the crash site. Further search and rescue operation found 32 more bodies. 52 people were killed in the crash; of these, 40 people died on the scene, while 12 others were declared dead in hospital. This number was initially only nine, until two more succumbed to injuries the day after, while a third, first officer Prithula Rashid, died two weeks later. The airport was closed for three hours due to the crash. 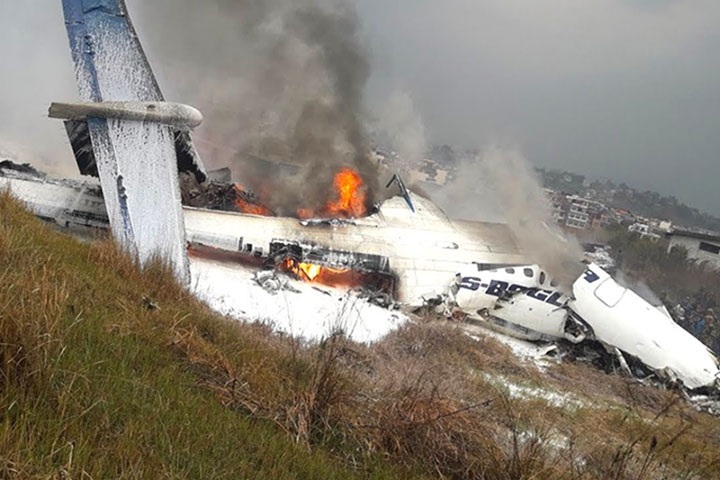 PIC: 0715:33.5 (Paraphrased and shortened from transcript) Lamia was the worst trained in US-Bangla, now in Biman Bangladesh talks ill of US- Bangla instructors including me. They said we f—ed in the cockpit. Lamia is not even worth approaching, she is ugly, fat with obnoxious appearance…what the f–k is she, the beauty queen of the world? My wife is far more beautiful, I don’t need Lamia. If I intend to buy sex, I can do that with 100 dollars. Because of the mother f—er Lamia, only Lamia, I decided to resign. She talks big, what she knows about flying … if this impression goes to my wife and imagine if you were my wife, if you learn that your husband is fooling with another girl, how would you feel?

PIC: 0804:52.5 That f—er Lamia, she made me… look at my f—ing eyes… weeping … crying… where did I do mistake (crying)? I take the blame and resigned. What is my next source of income? At least look at me f—er (crying and blowing nose) Do I need to cry like this?

PIC: Look at me now (crying, choking and blowing nose). So, it is my problem that I have not been able to teach you.

PIC: How can I forgive her. The girl for whom I have taken so much pain. We don’t know f–k how do I accept that, tell me (crying and blowing nose) PIC: 0807:42.5 We will do approach checklist at Romeo, okay (Bangla)?

PIC: 0810:17.5 Do you know that I have not slept during the whole night and I cried a lot (Bangla). I have received so much pain … you have seen me now. I have cried enough my daughter, cried a lot.

PIC: 0819:03.5 I have dropped my cigarette, let me find the thing, do you know where I have dropped it … it is on the left. There is possibility of catching fire.

PIC: Forget it. Okay adjust the pitch control of Weather Radar … Okay we don’t need this now out of cloud (Bangla) … Why are you holding the power levers? I am the pilot flying, idiot, I should be holding. What is our QNH 1015 okay? Okay put your HDG bug on top.

PIC: What altitude at 5 DME

PIC: I do not understand what you are saying, say slowly. (Bangla) [“MIMINUMS, MIMINUMS] [GEAR UNSAFE WARNING]

PIC: Okay put the gear down. Flaps 15, and Before Landing Checklist

PIC: Not seen yet? (Bangla) No problem, it will be in front.

FO: Sir, how have we missed the runway?

PIC: No worry, no worry. We are going to VOR. [CONTINUOUS EGPWS WARNING]

PIC: So, our VOR is on to the left, is it not? Okay, Before Landing Checklist is done?

FO: Sir, this is runway

PIC: Have you seen the runway, where is it?

PIC: So I have done mistake, it happens isn’t it? It can happen since I was talking to you! Where is our VOR, gone left isn’t it, so let me make a turn 15 degrees to come back to the final.

PIC: Where is the runway? (Bangla) 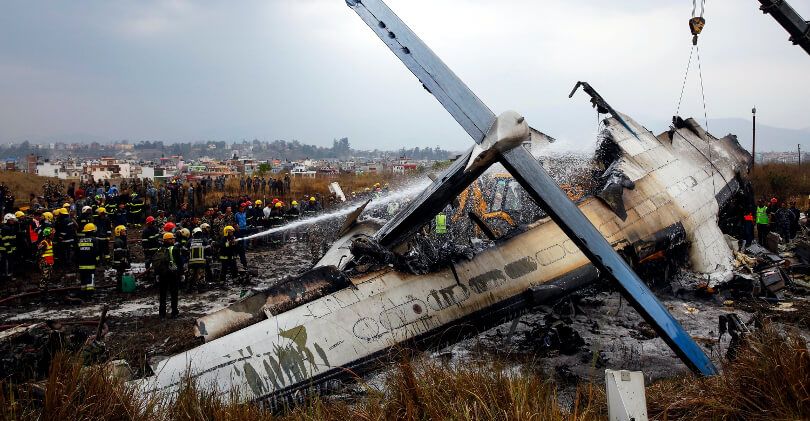