Japan Airlines Flight 123 was a Japan Airlines domestic flight from Tokyo International Airport (Haneda) to Osaka International Airport (Itami). The Boeing 747-SR46 that made this route, registered JA8119, suffered mechanical failures 12 minutes into flight and 32 minutes later crashed into two ridges of Mount Takamagahara in Ueno, Gunma Prefecture, 100 kilometers from Tokyo, on Monday 12 August 1985. The crash site was on Osutaka Ridge, near Mount Osutaka.
All 15 crew members and 505 out of 509 passengers died, resulting in a total of 520 deaths and 4 survivors.

It remains the deadliest single-aircraft accident in history. 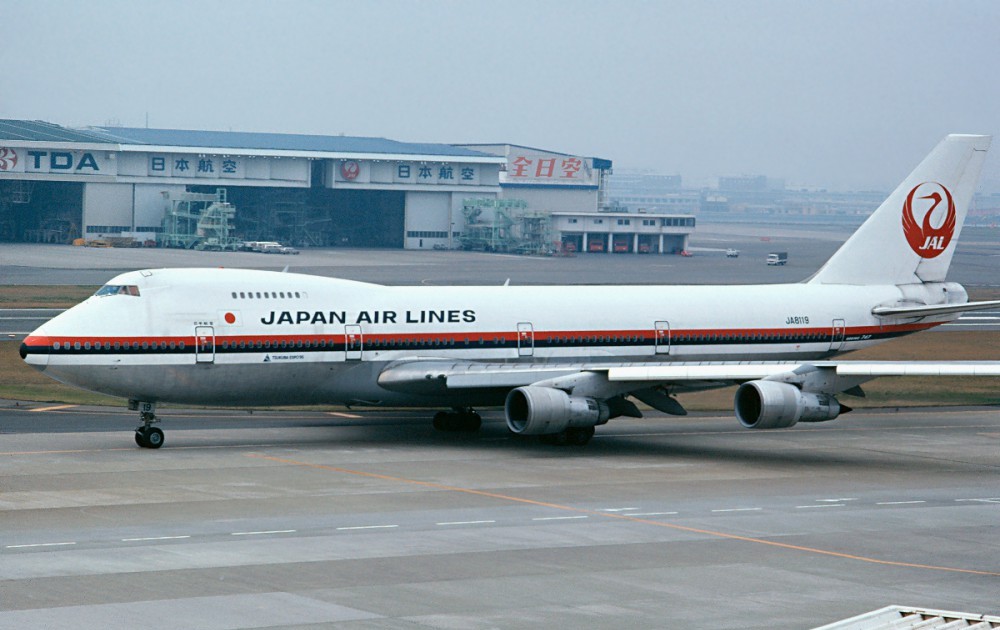 JAL Flight 123 took off from Tokyo-Haneda at 18.12h for a flight to Osaka. At 18.24h, while climbing through 23900ft at a speed of 300kts, an unusual vibration occurred. An impact force raised the nose of the aircraft and control problems were experienced. Two minutes later hydraulic pressure had dropped and ailerons, elevators and yaw dumper became inoperative, followed by dutch roll and plughoid oscillations (unusual movement in which altitude and speed change significantly in a 20-100sec. cycle without change of angle of attack). The aircraft started to descend to 6600ft while the crew tried to control the aircraft by using engine thrust. Upon reaching 6600ft the airspeed had dropped to 108kts. The aircraft then climbed with a 39deg. angle of attack to a maximum of approx. 13400ft and started to descend again. JAL123 finally brushed against a tree covered ridge, continued and struck another ridge, bursting into flames.

On the 13th August 1995, debris from the stricken airliner were found in Sagami Bay
including parts of the tail fin, lower rudder, panelling from the rear fuselage and
ducting from the auxiliary power unit.

Virtually half of the tail fin had detached in flight falling into the sea between
Oshima Island and the headland.

The chief Japanese investigator was Mr Fujiwara, to assist in the investigation there were experts from Boeing and the NSTB including Ron Schleede, Deputy Director, Office of Aviation Safety.

It was established that seven years earlier the Boeing 747, Registration: JA8119, had been involved in a tail scrape during landing. The rear pressure bulkhead had been repaired at Osaka by Boeing Engineers. It was discovered that the pressure bulkhead had been incorrectly mended with the doubler plate not extending accross the whole repair, thus a single line of rivets carried the loads.

On the 12th August 1985 at 24,000ft 18:24 local time, the seam failed in the bulkhead, causing the bulkhead to blow out, creating an overpressure in the tail severing the four sets of hyraulic control lines and blowing part of the tail section off.

Captain Takahama: (The captain called for; Emergency squawk 7700 on transponder)

Flight Engineer: (reported after conversation, via plane intercom, with flight attendant)
"Captain, door five right window. Emergency descent may be advisable.
Shall we use our oxygen masks, too?"

Tokyo control: "You are now 72 miles from Nagoya; can you land at Nagoya?"

18.33 At this stage the engines were still operational, however all flying
controls and hydraulic systems were inoperative. The aircraft was experiencing
a condition called "Dutch roll". The off duty stewardess Yumi Ochiai, one
of the four survivors, who had been sitting in the rear section of the plane
recalled how the 747 began to "hira-hira", fall like a leaf.

The pilots attempted to direct the aircraft using the engines alone, and
lowered the landing gear to try to help control the speed and stability
of the plane.

18.41 At 22,000ft complete control was lost and the aircraft banked in a
full circle 2.5 miles in radius over Otsuki City.

Tokyo Control: "Can you control now"

The crew applied full power to climb but the aircraft began to pitch up and down wildly.
Then the speed began to drop rapidly down to 108kt.

Flight Engineer: "Shall I rev it up?"

Flight Engineer: "We are gaining speed"

Captain Takahama: "Northwest of Haneda. Eh, how, how many miles?"

Tokyo Approach: "Yes, that's right. According to our radar it is 55 miles northwest, ah
25 miles west of Kumagaya. Roger, I will talk in Japanese. We are ready for your
approach any time. Also, Yokota landing is available. Let us know your intensions."

18.50 The aircraft was now decending the Captain tried to control the plane using
flaps and power.

Captain Takahama: "It's the end." 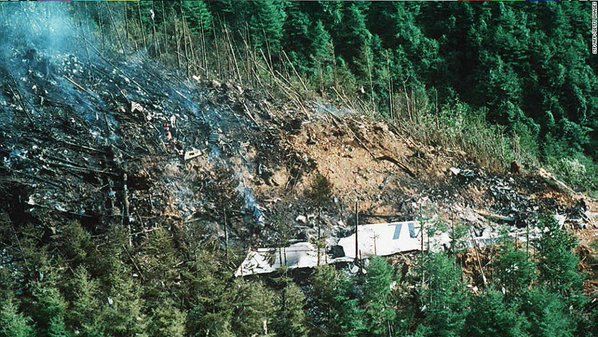