Southwest Airlines Flight 1455 was a scheduled passenger flight from McCarran International Airport, Las Vegas, Nevada to Burbank-Glendale-Pasadena Airport, Burbank, California, that overran the runway during landing on March 5, 2000. The aircraft, a Boeing 737-3T5, registration N668SW, came to rest on a city street adjacent to a gas station. The National Transportation Safety Board found that the incident was due to the pilots attempting to land with excessive speed. They also found that the air traffic controller placed them in a position from which their only option was a go around. Two of the passengers were seriously injured, and there were many minor injuries. As a result of the incident, the airport installed an Engineered Materials Arrestor System (EMAS) at the east end of the incident runway. The aircraft was written off, making the incident the 10th hull loss of a Boeing 737-300. This was the first major accident in the airline's 29-year history. 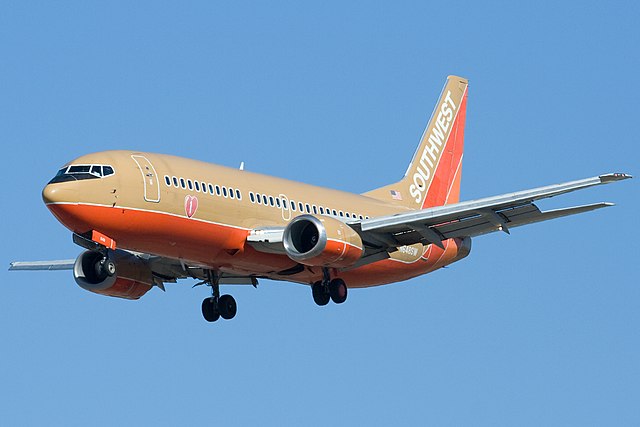 Flight 1455 departed McCarran International Airport (LAS), Las Vegas, Nevada at 1650, more than 2 hours behind schedule due to inclement weather in the area. At 18:04:02, when the aircraft was 19 nmi (35 km) north of the BUR outer marker, the SoCal approach controller instructed the aircraft to maintain 230 knots (430 km/h; 260 mph) or greater until further notice. The controller later informed the captain to place the aircraft into the approach pattern between two other flights. The captain acknowledged the instructions.

At 18:04:42 the first officer informed the captain that the target airspeed for landing would be 138 knots (256 km/h). This value was based on standard procedures in the Southwest Airlines Flight Operations Manual (FOM). At 18:05:13 the captain told the first officer that the air traffic controller had instructed them to remain at 230 knots (430 km/h; 260 mph) or greater "for a while."

At 18:10:24 the ground proximity warning system (GPWS) began to sound a "sink rate" warning in the cockpit. The aircraft was descending at an angle of 7 degrees, when the angle of descent for most aircraft landing on that runway was 3 or 4 degrees. Both pilots ignored the warnings. At 18:10:44 the warning system in the cockpit began to sound. The captain responded to these warnings with "that's all right."

The captain stated after the accident that he knew as the aircraft passed 500 feet (150 m) that he was not "in the slot," meaning the conditions had not been met for a safe landing, in this case because of an excessive airspeed. The captain further stated that he understood that if he was not "in the slot," procedures demanded a go-around manoeuvre to abort the landing. He could not explain why he did not perform a go-around manoeuvre. The first officer likewise indicated after the accident that he was aware that they were not "in the slot," but said he believed the captain was taking corrective action.

The aircraft touched down on the wet runway at 44 knots (81 km/h; 51 mph) over the target airspeed. Furthermore, it touched down 2,150 feet (660 m) from the runway threshold, 650 feet (200 m) beyond the 1,000–1,500-foot (300–460 m) range established by the Southwest Airlines FOM. The captain deployed the thrust reversers and then he and the first officer applied manual brakes, but according to later NTSB findings, under those conditions even maximum braking would not have prevented the aircraft from overrunning the end of the runway.

Unable to stop in time, the Boeing 737 overran the end of Runway 8. "The airplane touched down at approximately 182 knots (337 km/h; 209 mph), and about 20 seconds later, at approximately 32 knots (59 km/h; 37 mph), collided with a metal blast fence and an airport perimeter wall." It finally came to rest on Hollywood Way, a four-lane city street, near a Chevron gas station. The nose section and front landing gear were sheared off, but otherwise the fuselage remained intact and there was no compromise of the cabin area. However, the 737 sustained structural damage from the accident and was later scrapped. 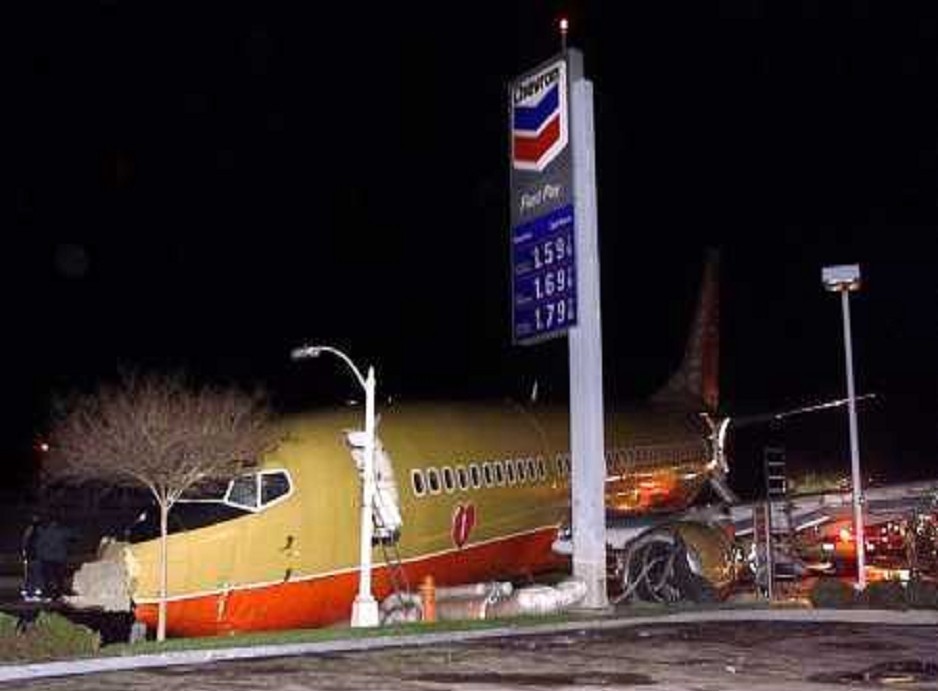 The cockpit voice recorder captured the flight's captain remarking, "Well, there goes my career," moments after the accident.

The aircraft was a 15 year old Boeing 737-3T5 (registration N668SW). The 737 was one of the oldest aircraft in Southwest's fleet, having been originally built for Orion Airways in 1984. The aircraft was powered by two CFM International CFM56-3B1 turbofan engines.

The NTSB concluded that the probable cause for the accident was excessive flight speed and the steep angle of the glidepath (7 degrees, as opposed to the 3 degrees normally used for both visual and instrument approaches), and the flight crew's failure to abort the approach when conditions were not met for a stable approach and landing. The action of the flight controller was listed as a contributing factor in the accident: "Contributing to the accident was the controller's positioning of the airplane in such a manner as to leave no safe options for the flight crew other than a go-around maneuver."

Months later, the pilots were fired as a result of this incident.[9] Southwest Airlines admitted the pilots' actions were negligent.

At the time, a Southwest spokesperson termed it "the worst accident" in the airline's history. Air safety experts and pilots suggested the accident was an example of a situation where "fast, steep, unstabilized approaches" are dangerous, and of how inadequate the safety margins around the Burbank runways are (as well as similar U.S. airports).

The gas station missed by the aircraft was later closed and demolished due to safety concerns. The lot became dedicated green space. 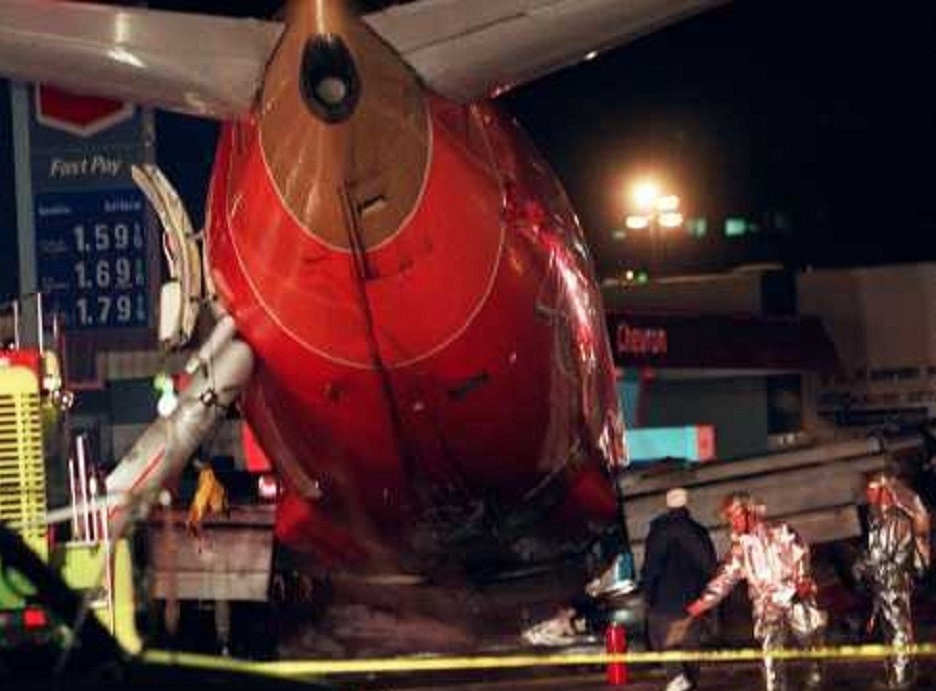