Bashkirian Airlines flight 2937 (BTC 2937), a Tupolev 154, originated in Ufa (UFA), Russia and flew to Moscow (DME) to pick up passengers. From Moscow the aircraft continued as a charter flight to Barcelona (BCN). 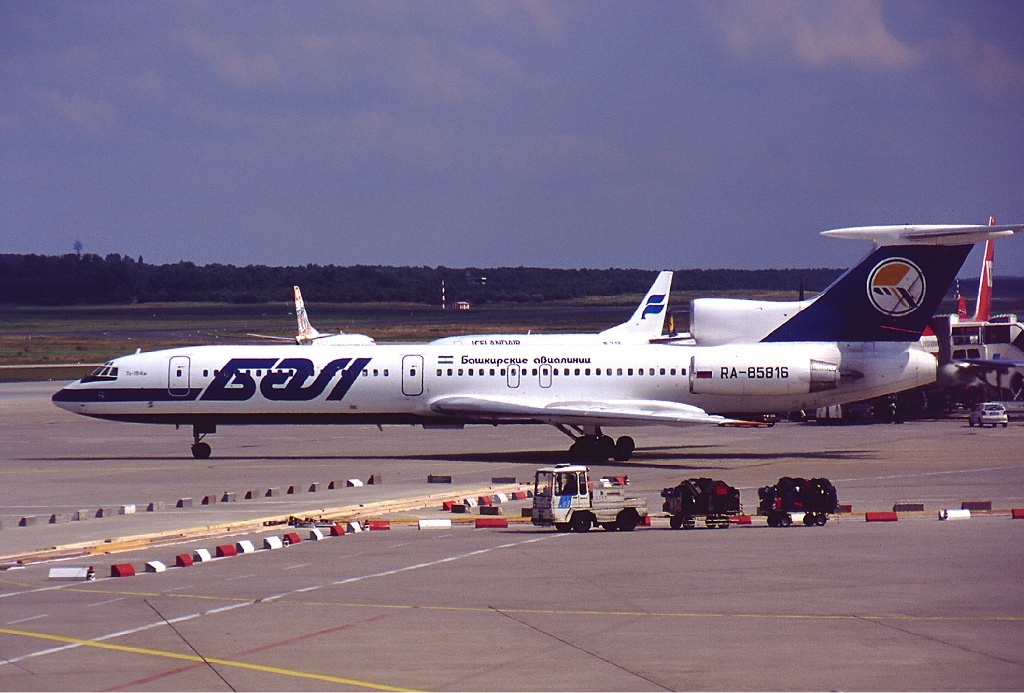 The flight used the RNAV-Route Salzburg - Traunstein - Kempten - Trasadingen at FL360. Communications were handed over from Munich to Zürich ACC at 23:30:11. At that moment one controller was responsible for the entire traffic in the Zürich airspace. He was monitoring two frequencies and two radar scopes. On one frequency (119,925 MHz) he was guiding one traffic for an approach into Friedrichshafen and on the other frequency (128,050 MHz) he had to control four aircraft. Among these four aircraft were Bashkirian 2937 and a DHL Boeing 757 cargo plane (DHL 611), enroute from Bergamo (BGY), Italy to Brussel (BRU), Belgium along RNAV-Route ABESI-AKABI-TANGO, also at FL360. 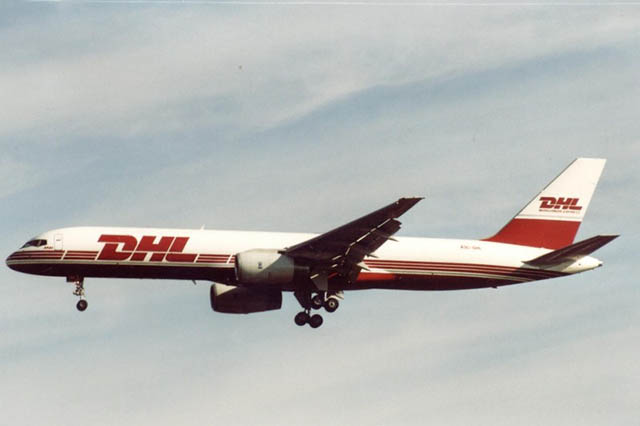 Between 23:25:43 and 23:33:11 LT the controller tried several times to establish contact with Friedrichshafen by phone. Because of working on the telephone net of Skyguide, the controller was not able to reach Friedrichshafen.
At 23:34:42 the Tupolev's Honeywell 2000 TCAS gave a Traffic Advisory because of the DHL 757 in the area. Seven seconds later the radar controller issued descent instructions to flight 2937: "Descend flight level 350, expedite, I have crossing traffic". This descent was necessary for continuation of the flight to Barcelona and to achieve a vertical separation with respect to the approaching DHL Boeing 757.

At 23:42:56 the crews of both aircraft received a Resolution Advisory (RA)-command from their TCAS. The DHL crew complied with this and initiate a descent. At the same time the Tupolev crew were trying to deal with the conflicting descent (by ATC) and climb (TCAS) instructions. Seven seconds after the Resolution Advisory-command, the ATC controller repeated the instruction to descend. The Bashkirian crew then decided to follow the ATC controller's instructions. A little later the TCAS aboard the Boeing 757 gave the crew a Resolution Advisory to "increase descent". They then contacted ATC, reporting that they were doing a TCAS descent.
Since both aircraft were descending, the TCAS of the Russian plane warned the crew to "increase climb" to avoid a collision. This was eight seconds before the collision. Just prior to the collision, both crews detected the other aircraft, and reacted to avoid the collision by attempting appropriate flight maneuvers. Nevertheless, at 23:35:32 both aircraft collided at approx. FL354. The tailfin of the Boeing 757 struck the left side of the Tupolev 154 fuselage near both overwing emergency exits, while the Tupolev's left wing sheared off 80% of the Boeing's tailfin. The Tupolev immediately broke up in four pieces (left wing, right wing, main fuselage and tail unit including the engines). The Boeing 757 lost control and crashed 8 km north of the Tupolev, just after both engines separated in flight. 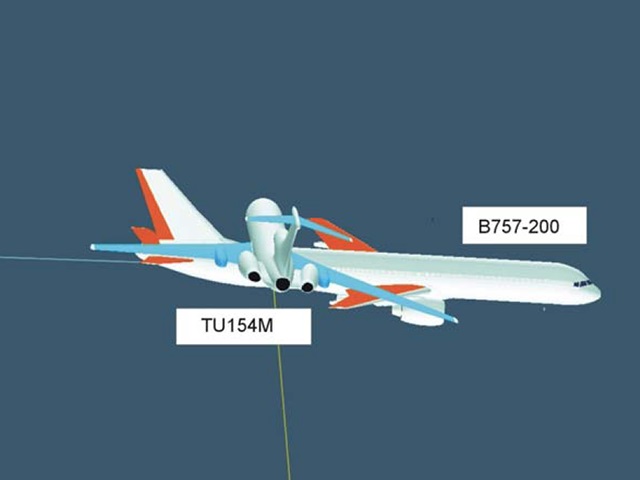 That night, from 23:00 the configuration of the radar data processing of Skyguide was modified. Thus the system was operating in FALLBACK modus. This requires among other facts, that radar separation values were increased from 5 NM to 7 NM. Also, the STCA (Short Term Conflict Alert) was not available at that time. The STCA at Karlsruhe Upper Area Control Center (UAC) however did work. From 23:33:36 on the controller of Karlsruhe UAC, tried in vain to get in contact with Zürich-ATC until 23:35:34. Between 23:33:36 and 23:34:45 the busy signal was to be heared afterwards the ringing tone. According to his statements the controller tried repeatedly to establish the connection via the priority button, but it failed. 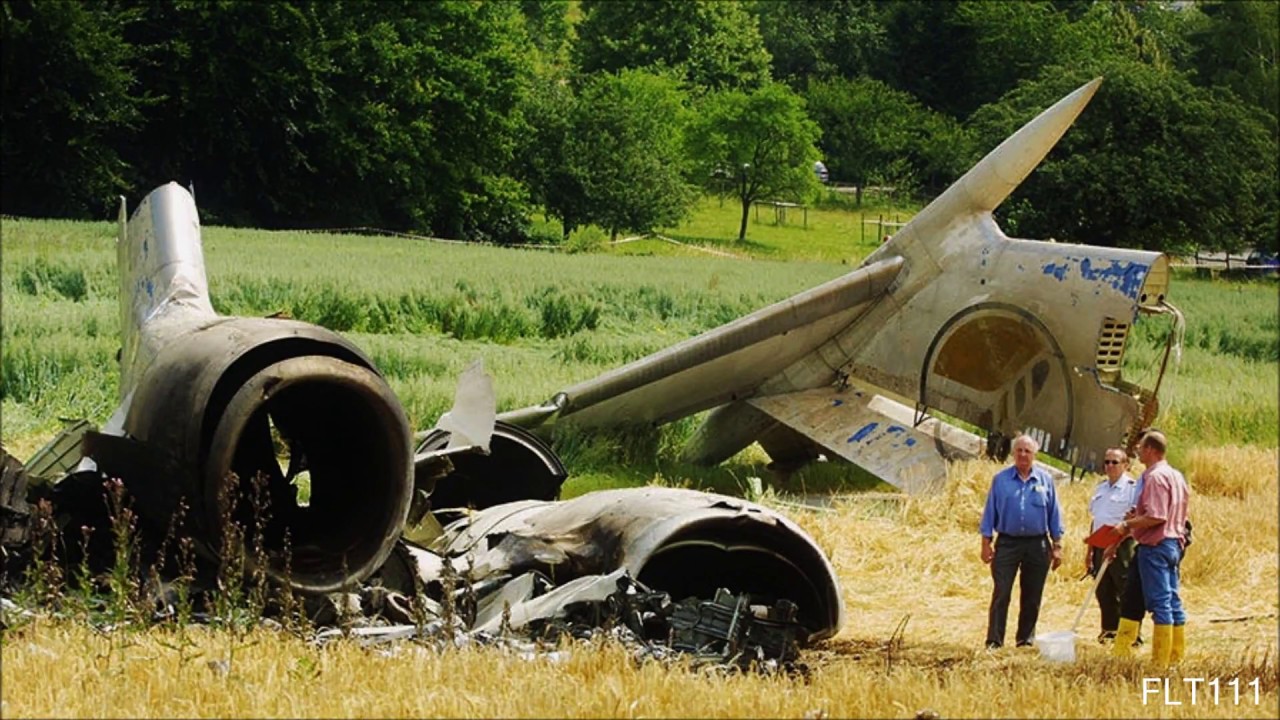 CAUSES: The following immediate causes have been identified:
- The imminent separation infringement was not noticed by ATC in time. The instruction for the TU154M to descend was given at a time when the prescribed separation to the B757-200 could not be ensured anymore.
- The TU154M crew followed the ATC instruction to descend and continued to do so even after TCAS advised them to climb. This maneuver was performed contrary to the generated TCAS RA.
The following systemic causes have been identified:
- The integration of ACAS/TCAS II into the system aviation was insufficient and did not correspond in all points with the system philosophy.
The regulations concerning ACAS/TCAS published by ICAO and as a result the regulations of national aviation authorities, operational and procedural instructions of the TCAS manufacturer and the operators were not standardized, incomplete and partially contradictory.
- Management and quality assurance of the air navigation service company did not ensure that during the night all open workstations were continuously staffed by controllers.
- Management and quality assurance of the air navigation service company tolerated for years that during times of low traffic flow at night only one controller worked and the other one retired to rest.